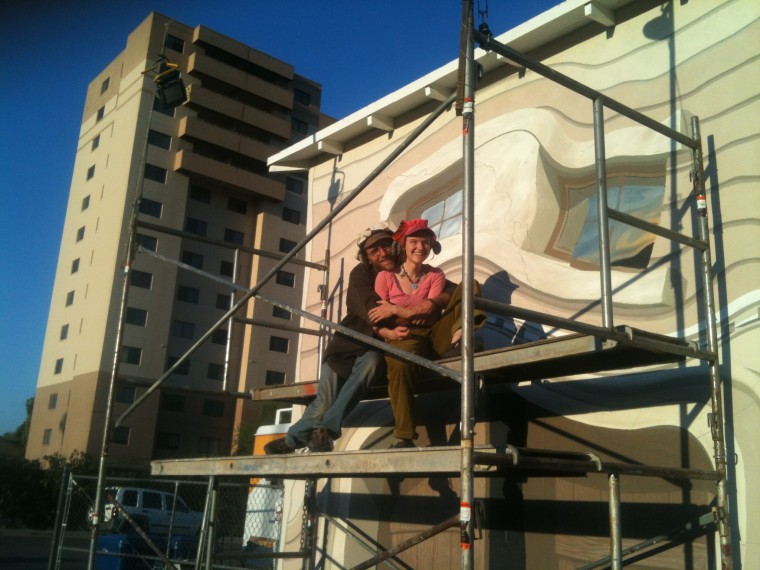 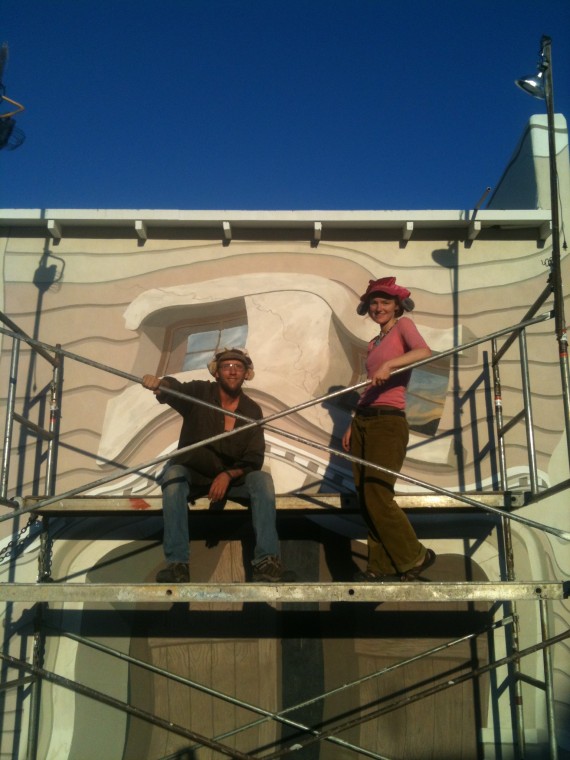 In the cool cover of night, R.E. Wall and Margaret Dewar stand on scaffolding, brushing paint on the side of a store on Mesa Main Street. When the sun comes up, they put their paints away and crawl into their own one bedroom — the back of an old work truck parked out back — and sleep through the heat of the day.

Wall and Dewar have been doing this since April, and the Eclectic Monkey Emporium, a second-hand clothing store, is finally starting to look like a melted San Francisco Victorian.

The owner of Eclectic Monkey Emporium, Glenn Blackmore, lived for several years in both San Francisco and Santa Fe before moving to Gold Canyon at the edge of the Valley. Going into the Valley for entertainment, Blackmore found Mesa and was surprised to see that the downtown of a city larger than Miami had none of the cultural identity and energy he was used to.

“I would think there would be a vibrant exciting downtown,” Blackmore said. “I found it beige.”

Taking advantage of the recessed economy and affordable rent in the downtown, Blackmore opened the Eclectic Monkey Emporium as a trendy free store for female victims of domestic violence in May 2011. The store, which Blackmore intended to keep discreet, quickly got attention from the public. Blackmore, realizing that a profitable business could pay the overhead costs of his charity venture, decided that the best way to attract business would be to turn the outside walls into a mural.

“I always say it’s so hot the buildings are melting out here,” Blackmore said. “So, I thought I’d melt the building.”

From the melted building, Blackmore included a Phoenix rising from the ashes, a symbol for the cultural rebirth of downtown Mesa and his hopes for the city, he said.

Wall and Dewar were natural candidates for Blackmore’s commission to design and paint the mural, he said. The two artists, members of the group Mural Mice, were unable to get work after eight years of running a community mural project in Prescott — a project that sparked controversy when one of the group’s murals prominantely featured a Mexican student on a public wall of an elementary school.

“I thought it would be appropriate with the rebirth to introduce them to the Valley, which is a bigger venue,” Blackmore said.

Blackmore received a grant for $14,000 from the West Mesa Community Development Corporation, but paying for the mural has become a group effort. His landlord paid to stucco the outside of the building so that it could be painted, and the artists, who were comissioned to paint for three months, will have painted for six months and bought more than $2,000 in paint when the project is completed at the start of November.

“It’s an investment into the community,” Wall said. “They’re at a point economically, where they have more to gain than to lose.”

The mural will further Mesa’s efforts to become an art destination, Wall said. Since the light rail will be extending onto Main Street, he said, it is important that the city has an art presence along the corridor before visitors get to the arts center.

“This is the first face people see when entering the town,” he said. “Rather than finding fine art in the galleries, you are going to find really great art on the streets,”

The artists would like to work toward more community building, Dewar said. It is hard for people to think of Downtown Mesa as a destination because it’s been slow for a while, but individuals can be more active in changing their world, Dewar said.

“I see Mesa as a city that could really use more public art, especially the community style, really trying to cultivate a sense of identity or even belonging among people,” Dewar said. “It’s the hardest thing to accomplish, but I think Mesa’s on its way.”

Dewar added that painting a melted Victorian building in the center of Main Street is synonymous with the melting of stigmas that Mesa is oppressed, conservative and boring.

Blackmore was warned of the stigmas by other downtown business owners who had experienced an unsupportive city in the past, but Mesa city council passed Wall and Dewar’s design, which included mostly beige tones, in 10 minutes — and now the other businesses are asking for murals, Blackmore said. The city is willing to help businesses that assert themselves, he said.

“This was as crazy a concept as possible,” he said. “If I can do this with outstanding support, everyone can.”

Michelle is a Senior studying print and multimedia journalism at Arizona State University’s Walter Cronkite School of Journalism and Mass Communication. Contact her at (480) 898-6514 or tribintern@evtrib.com

This is an impressive piece of work. Nearly every day I notice some progress, or a detail that's been filled in from a previous rough-in. These are good artists!