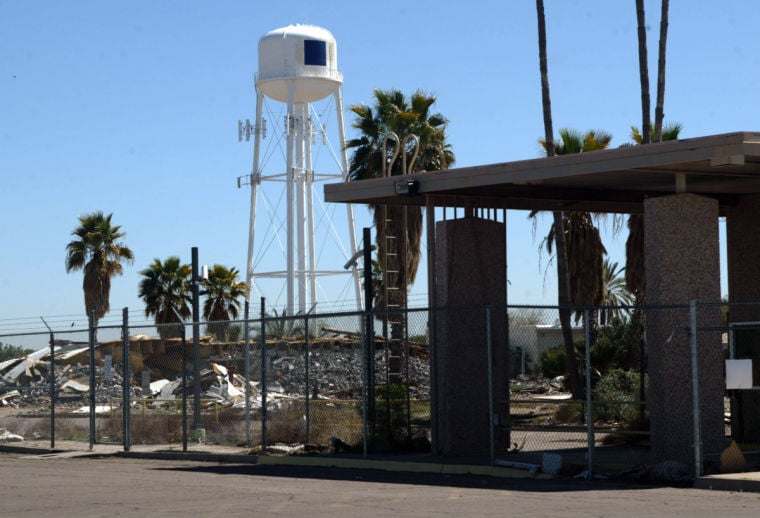 A few old buildings and a water tower are shown on the property that was once the General Motors Proving Grounds in Mesa March 12, 2013 in Mesa. [Tim Hacker/Tribune] 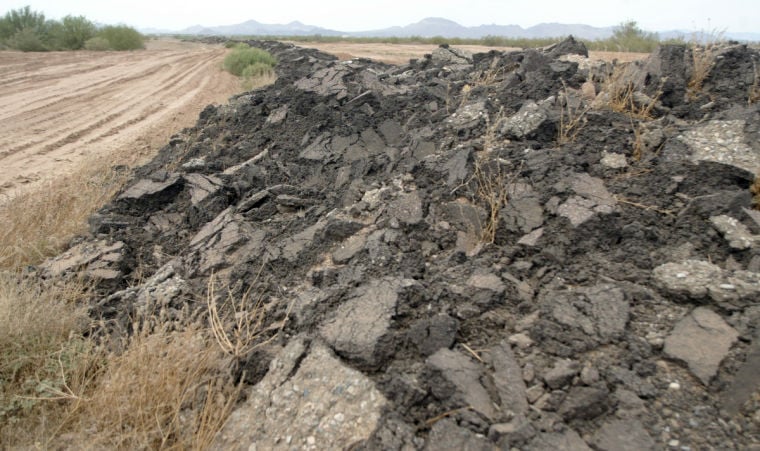 The once asphalt track at the GM Proving Grounds is being recycled and being used during the first phase of Eastmark in Mesa, Friday, May 17, 2013. [Tim Hacker/Tribune]

A few old buildings and a water tower are shown on the property that was once the General Motors Proving Grounds in Mesa March 12, 2013 in Mesa. [Tim Hacker/Tribune]

The once asphalt track at the GM Proving Grounds is being recycled and being used during the first phase of Eastmark in Mesa, Friday, May 17, 2013. [Tim Hacker/Tribune]

Recycling in buildings is nothing new to most businesses.

But Terry DeQuina, Mark Jones and Hank Manning saw potential in the idea. And with their backgrounds in construction and community development, they realized their idea had merit.

That was especially true when it came to Mesa’s Eastmark, a 3,200-acre development by DMB going up on part of the former GM Proving Desert Grounds.

In 2009, the three men started Reclamation Sciences, a Valley-based company created to clean up land or remove items so something new can be built. DeQuina and Jones are former DMB employees and knew how DMB operates. They also understood the idea of “sustainability” being pushed for Eastmark, which became their first client.

“For several years there’s been this wave of recycling, doing more with less, repurposing items,” DeQuina said. “When you build stuff, then take it apart, you hate to see good materials thrown away when there are good uses for it.”

When DMB purchased the GM Proving grounds in 2006, the company received records from GM about what was left on the property – from 430,000 square feet of buildings to 85 miles of race track and roadway to pounds of copper wiring. GM also handed over photos and pages of data detailing how everything was constructed. DMB then sold the items to Reclamation Sciences for $100 – then asked the company to recycle or find new uses for at least 95 percent of it.

“We first began with what GM left. They were very good stewards. They built stuff to last,” DeQuina said. “The other thing they did was keep pretty meticulous records. We refer to them today. That helps us to understand how things are built. All of us have background in construction, so it’s a reverse type of thinking. So we refer to those records and plans to help us come up with a methodical plan to undo and unbuild stuff.”

“There is a little trial and error often, but it helps us to develop propriety techniques on how to remove items and preserve and create value by removing them in a certain way,” DeQuina said.

So far, DMB, with Reclamation Sciences, has recycled 3 million pounds of ferrous metal, 254,000 pounds of copper, 30,000 tons of asphalt and concrete and 36 metal building packages.

“They have systematically worked to repurpose, reclaim or reuse as much as they can,” said Dea McDonald, DMB’s Senior Vice President and Eastmark’s General Manager.

As far as the idea to send no more than 5 percent to the landfill, DeQuina said, “We’re crushing that goal. We’re well under 5 percent.”

Some of the asphalt has been used in Eastmark as backfill around pipes or as temporary construction roads, McDonald said. DeQuina said other items have been purchased by car dealerships, ranchers, metal shops, small businesses, other proving grounds and, of course, “pickers,” or people who find older items to turn into something new.

“We are on the last 10 percent of the building deconstruction effort, which was probably the most complicated effort to undertake,” DeQuina said. “While you might see a few buildings they’re being used.”

It could be three to four years before everything is complete, he said.

I looked this development over on Google Earth, a little close to the airport for me. Can't wait until the owners of a house in this area have a fit like they do near the Scottsdale Air-park... Gateway will be a large airport in a few years... I can hear them whining now....