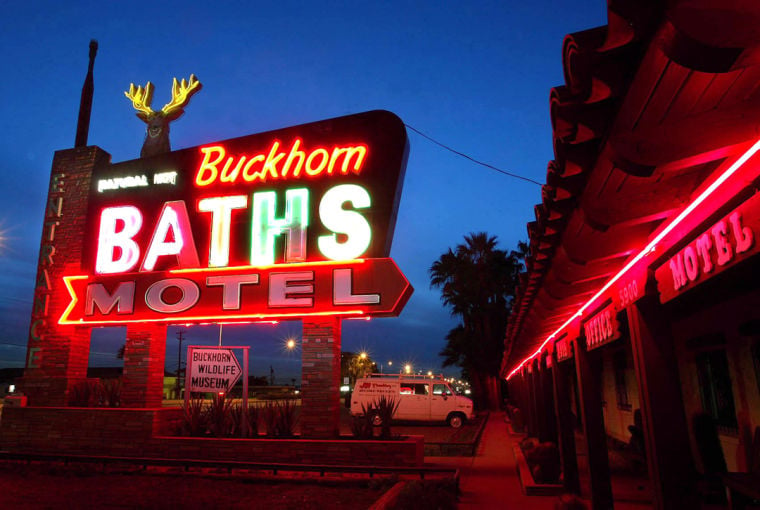 The City of Mesa is in talks to purchase and possibly restore the historic Buckhorn Baths Motel after voters approved a $70 million bond last fall that includes money for renovating some of the city’s landmarks. Pictured in 2007. [Tribune file photo] 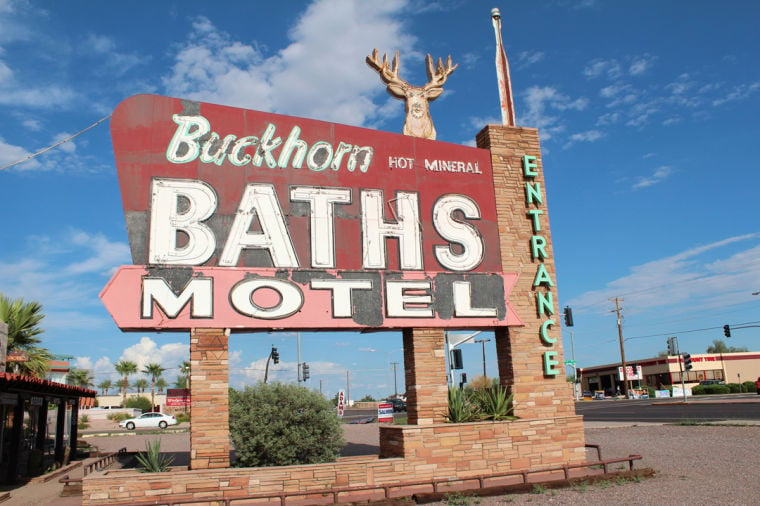 The Buckhorn Baths Motel sign as it looked in August 2012 on the corner of Main Street and Recker Road in Mesa, Arizona. [Cronkite News file photo]

The City of Mesa is in talks to purchase and possibly restore the historic Buckhorn Baths Motel after voters approved a $70 million bond last fall that includes money for renovating some of the city’s landmarks. Pictured in 2007. [Tribune file photo]

The Buckhorn Baths Motel sign as it looked in August 2012 on the corner of Main Street and Recker Road in Mesa, Arizona. [Cronkite News file photo]

Nearly a month after the Diving Lady was again restored to her perch high above Main Street, the focus of the Mesa Preservation Foundation has shifted to restoring and reopening the also-historic Buckhorn Baths Motel.

“The Buckhorn will be a herculean effort,” said Vic Linoff, the president of the Mesa Preservation Foundation and the board chair of the Mesa Historical Museum. “It makes the diving lady look like a piece of cake.”

Last fall, Mesa voters approved a $70 million bond which grants money, in part, for the city to use in procuring the Buckhorn property.

“The city is in ongoing negotiations with the property owners,” said Marc Heirshberg, parks, recreation and commercial facilities director for the City of Mesa.

Currently, the city’s real estate department is in working with the property’s trustee, Ted Slinger Jr. — son of long-time owners Ted and Alice Slinger — on a possible deal.

“If we’re successful in acquiring the land, our first interest is in preservation, but outside of that, we would have to pull all those other stakeholders together,” Heirshberg said. “There are hundreds of ideas for that property, for what it could be and what it should be.”

Involved parties include more than the Mesa Preservation Foundation and the Mesa Historical Museum, he said. The family trust could include requirements as part of the sale and the surrounding neighbors would have to be considered too.

But Linoff believes that the property would be best served as a mixed public-private-nonprofit partnership, similar to a similarly restored property in Phoenix.

“There’s no way you could buy and restore this and still return a profit,” Linoff said, estimating the total purchase and restoration costs at $10 million. That number, however, would depend entirely on how much of the property was restored.

That being said, the opportunity to preserve some of Mesa’s history, while also following the wishes of voters would create the perfect opportunity to recreate what Phoenix has done with the Rosson House, he said.

“If it was well managed, well run, it could be revenue neutral,” he said.

Various entities could be involved in the running of the property, Linoff envisions, with a non-profit, such as the Mesa Historical Museum, running an onsite museum featuring both the historical importance of the road-side attraction and the wildlife taxidermy museum, left by Ted Slinger.

“I can see anything, except the dirt golf course,” Linoff said laughing.

The original property featured a restaurant, which Linoff said he could see a private company opening. The old rooms could either be used as lodging again or rented out as studio space to local artisans.

“There would be opportunities for events, I could see weddings held there,” he said.

The city would rent the space to these for-profit and non-profit entities for a percentage, using the money for upkeep and utilities.

“The hot springs are still there,” Linoff said. “They just need repair.”

The actual Buckhorn Baths were discovered after property owners were digging a well for water, Linoff said. A fault line extends from the Castle Hot Springs near Wickenburg through the Valley and across the Buckhorn property.

“With 113 to 130 degree, mineralized water, they realized very quickly they could sell that as an amenity,” Linoff said.

The original building featured special bathing and massage rooms, which could be restored and used again.

And much like the Diving Lady, the Buckhorn prominently features the mid-century buzzing neon decoration.

“There must be miles and miles of neon tubing that would need replacing,” he said.

The exterior and roofline of the building was once outlined in neon, and would have beckoned travelers as they neared the location in the darkened desert.

With the absence of streetlights and other surrounding structures, it would have “brilliant neon standing out in great glory” Linoff imagines.

While a roadside stop, it was also a place that drew major league baseball players, Hollywood actors and other movers and shakers to the area, eventually leading to the solidifying of Spring Training as an Arizona staple, Linoff said.

“We believe there is no place quite like the Buckhorn anywhere in the world,” he said.

For more information on the Mesa Preservation Foundation and developments on the Buckhorn Paths project, visit www.mesapreservationfoundation.org.

I could see that being remade into a great day spa if they restored the mineral baths. There is a very large green area that could be a LOT of things.

But it would take a LOT of money. Far more than 10 million I think.

But not matter what happens / or doesn't happen --- the place should NEVER be torn down. It is a relic of what could be called " the good old days ".

It < should > be restored fully but considering how hard it was to get the money for the Diving Lady ... the odds are slim and none and slim's outta town.

The Buckhorn Baths have been a fading eyesore since the 1950s and should be leveled. How about a park to replace this dump?