You have permission to edit this article.
Edit
Home
The Mesa Tribune
Scottsdale Progress
The Chandler Arizonan
Gilbert Sun News
Sports
Best of
Digital Edition
More
Classifieds
Contact Us
1 of 7 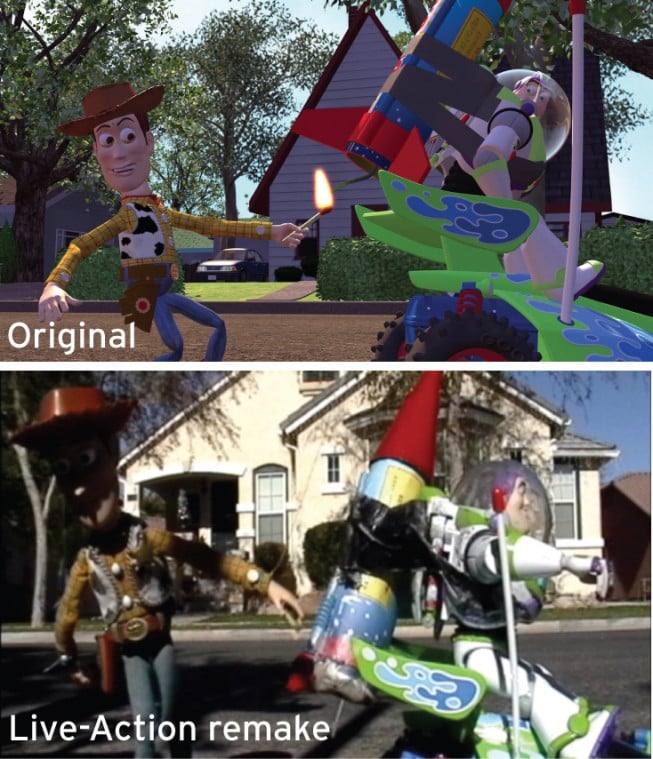 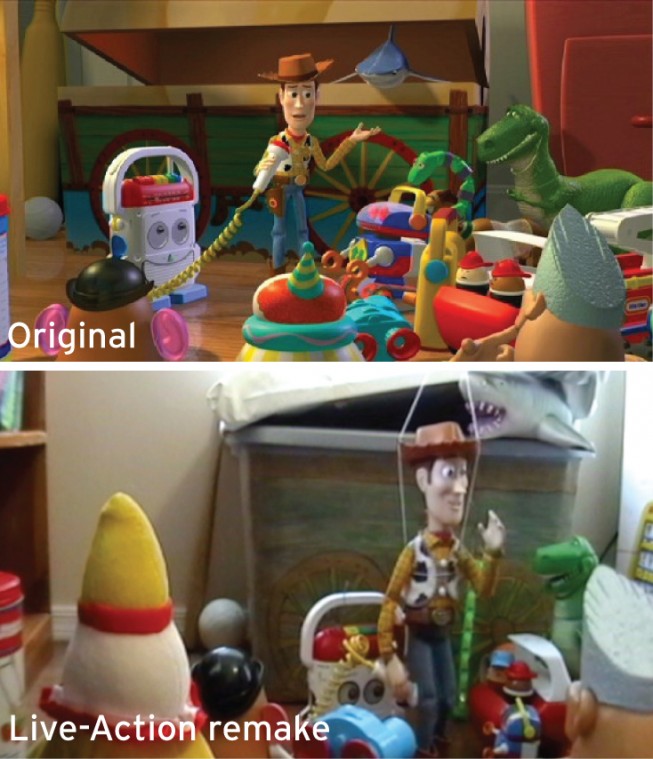 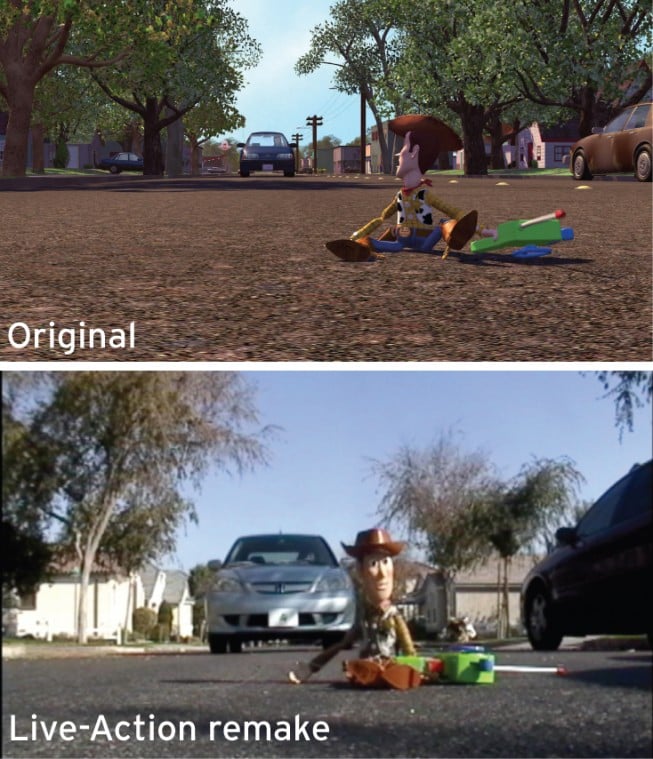 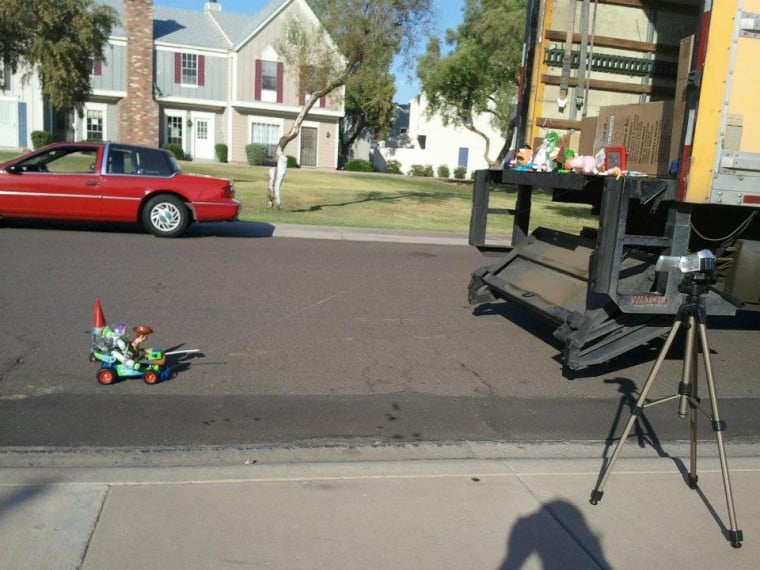 Woody and Buzz are strapped to a remote control car while the rest of the toys ride in the back of the moving truck in this production still of the live action “Toy Story” remake, directed by Gilbert’s Jonason Pauley, 19, and Apache Junction’s Jesse Perrotta, 21. (Photo courtesy Jonason Pauley/Jesse Perrotta) 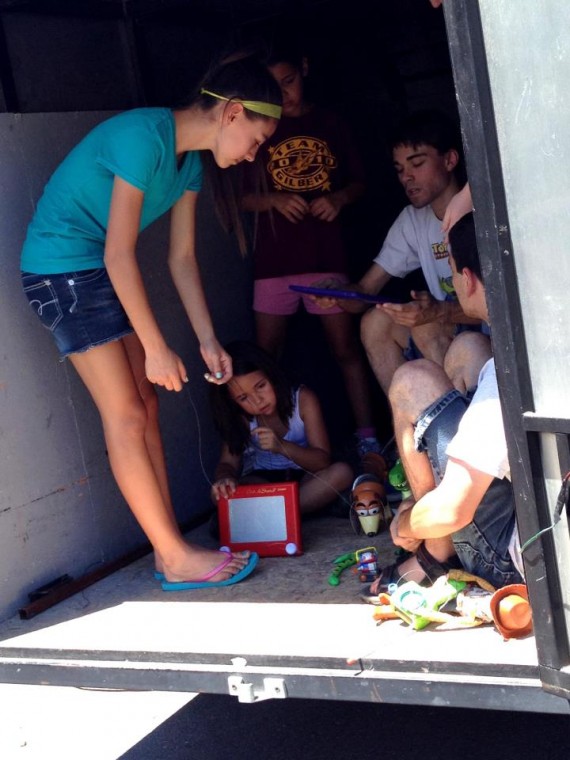 Jonason Pauley of Gilbert (white shirt, holding iPad) and his “crew” work together to set up filming for a scene of a live-action “Toy Story” remake. (Photo by Cary Kent) 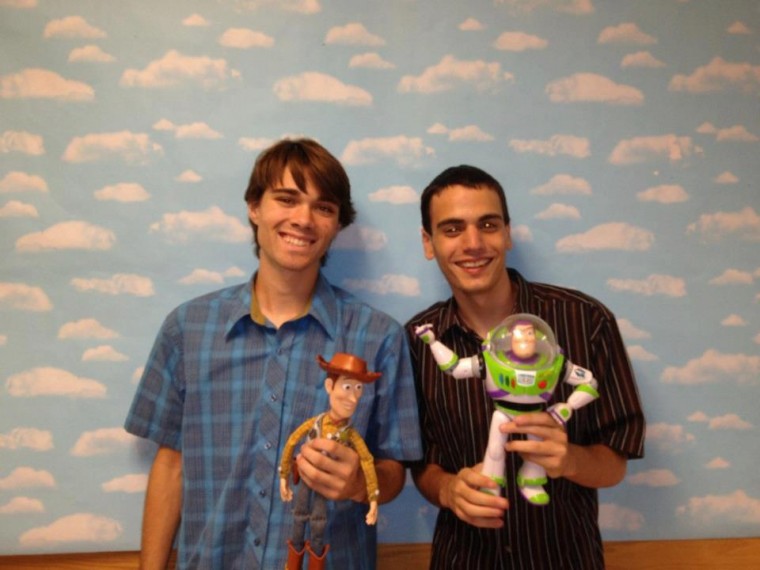 Woody and Buzz are strapped to a remote control car while the rest of the toys ride in the back of the moving truck in this production still of the live action “Toy Story” remake, directed by Gilbert’s Jonason Pauley, 19, and Apache Junction’s Jesse Perrotta, 21. (Photo courtesy Jonason Pauley/Jesse Perrotta)

Jonason Pauley of Gilbert (white shirt, holding iPad) and his “crew” work together to set up filming for a scene of a live-action “Toy Story” remake. (Photo by Cary Kent)

Visiting Pixar Animation Studios in Northern California has been a longtime dream of two young filmmakers from the East Valley.

So, naturally, Jonason Pauley of Gilbert, and Jesse Perrotta of Apache Junction knew they’d have to do something big to get the Disney-backed studio — producers of “Cars,” “Up,” “Finding Nemo,” “Wall-E,” “Ratatouille” and, of course, the “Toy Story” series — to let them inside the gates.

“[Pixar] doesn’t let people in unless you’ve done anything,” Pauley said. “But I’m pretty confident; there’s a group of people who made a pizza planet truck in California and they got in.”

After two years of work on a live-action, full-length, shot-for-shot remake of Disney-Pixar’s original “Toy Story,” Pauley, 19, and Perrotta, 21, are biting their nails, anxious to hear what Pixar thinks of their project — and hoping that just maybe they’ll be let in the gates one day, too.

Pauley and Perrotta met through their Mesa church when they were in high school and bonded over a mutual love for “Toy Story.”

“I had probably seen it hundreds of times before we even started making the movie,” Pauley said. “We both had it memorized already.”

Pauley had been making videos since he was 7 years old and Perrotta and his brother had already started a puppet series titled “Billy and Chucky” on YouTube. Seeing “Toy Story” when he was a kid sparked his creativity, Perrotta said.

“After seeing ‘Toy Story,’ I started playing with my toys differently; I really made them alive.”

Co-directors Pauley and Perrotta started “Live-Action Toy Story Project” in June 2010 after seeing “Toy Story 3” in theatres. A lunch discussion about which clip of “Toy Story” the two friends should film using live actors and toys quickly turned into an elaborate plan to recreate the entire first film in the “Toy Story” trilogy, Perrotta said.

“Jesse and I were reminded how big of fans we were and wanted to do a scene and couldn’t decide which one to do, so we decided to do the whole thing,” Pauley said.

The two friends quickly set about constructing “Toy Story” in real life. They gathered toys from friends and family and made trips to Goodwill to find what they couldn’t borrow, and Sid’s mutant toy’s had to be built from scratch.

“We had to find toys at Goodwill and rip them apart and make them ourselves,” Pauley said.

Pauley’s parents allowed him to transform two rooms in their house into Andy and Sid’s rooms, which was where the majority of the filming took place. For the scenes outside of the rooms, the directors cruised the Valley for houses that looked like they belonged in the California neighborhoods of the “Toy Story” scenes.

“We would just drive around looking for it and knock on doors and ask people,” Pauley said.

Amazing Jakes in Mesa, Peter Piper Pizza in Tempe and a small arcade in Oregon collectively made up Pizza Planet. And for the actors, Pauley and Perrotta rounded up about 150 friends, family members and kids from their church. Relying on volunteers and loans as much as possible, the team ultimately spent about $1,000.

“If ‘Toy Story’ was in real life this is what it would look like,” Perrotta said. “Someone who knows the movie really well will say, ‘Wow, that tiny thing in the background they got right.”

However, creating an exact replica of “Toy Story,” which debuted in 1995, didn’t always go smoothly, Perrotta said. Orchestrating all of the actors along with real live toys was challenging at times, he said. Coordinating a schedule to use a borrowed house in a scene with the dog, Spud, at a time when both the dog’s owners and the elementary-school-aged actors could be there was the hardest.

“Multiple occasions, I was free, and we had to get a dog from a strangers house and couldn’t,” Pauley said.

Finding enough hands to move toys around was also very difficult, and the team sometimes resorted to recruiting kids on the street for help, Perrotta said.

There were also tense scenes that, although they miraculously worked out for the animated characters, didn’t go so well in real life.

“A couple toys were injured on the set,” Perrotta said. Buzz and Woody were both run over by a car and Buzz wasn’t very lucky after a long fall out of a window. The team also had to enlist an understudy after Andy’s mom stepped on an army man. In the Pixar vesion, the flattened toy is still alive, but “he really did break in our version,” Perrotta said.

“If you have a good eye you can catch little things we did.” That includes sly cameos by Waldo from ‘Where’s Waldo?’” Perrotta said.

Pauley and Perrotta completed the film in August with much support from fellow “Toy Story” fans around the world. The project’s Facebook page has more than 1,100 likes.

The team also filmed a live-action remake of the ending scene in “Toy Story 3,” which has been viewed on YouTube more than 1.3 million times.

“It brings a whole new element to the story,” one fan said about the short clips Pauley and Perrotta have posted on YouTube. “I loved ‘Toy Story,’ but seeing the motions and hearing the voice while actually looking at REAL toys makes the whole concept much more charming,” he said.

Several fans have asked about the film’s release, but Pauley and Perrotta are waiting for a response from Pixar before they go any further with the film. They are certain they need permission from Pixar to release it themselves, but they would prefer to simply give the film to Pixar to be used as a bonus feature, Pauley said.

Representatives from Pixar did confirm that it had been received, but would not comment on what the company plans — if anything to — do with it. Longtime Pixar filmmaker Lee Unkrich — an editor on the original “Toy Story,” co-director and editor of “Toy Story 2” and director of the Academy Award-winning “Toy Story 3” — has corresponded with Pauley and Perrotta via Twitter and offered moral support.

“My wife said this still made her cry,” Unkrich tweeted about the remade “Toy Story 3” ending scene.

However, the company does not comment on fan-created art for fear that it will be bombarded by fans seeking feedback, said Pixar publicist Chris Wiggum.

“We have so much respect for Pixar, we don’t want to do anything without their consent,” Perrotta said. “All I really wish is that our fans get to see it someday. I just want everybody to see this movie one way or another.”

Now that the project is completed, the two friends are ready to put “Toy Story” videos behind them, but they are planning on filming some original works and putting more effort into “Billy and Chucky” on YouTube. Pauley is studying film at Northern Arizona University and has his sights set on someday working at Pixar or having his own film company.

Michelle is a senior studying print and multimedia journalism at Arizona State University’s Walter Cronkite School of Journalism and Mass Communication. Contact her at (480) 898-6514 or tribintern@evtrib.com