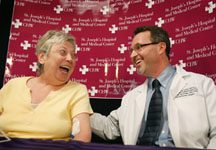 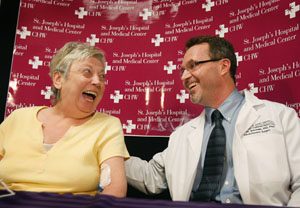 SHIPSHAPE: Ann Wylie, 61, of Scottsdale shares a laugh Monday with her surgeon Ross Bremner during a news conference at St. Joseph’s Hospital and Medical Center in Phoenix. Wylie is the beneficiary of the Valley’s first lung transplant.

SHIPSHAPE: Ann Wylie, 61, of Scottsdale shares a laugh Monday with her surgeon Ross Bremner during a news conference at St. Joseph’s Hospital and Medical Center in Phoenix. Wylie is the beneficiary of the Valley’s first lung transplant.

Pink, not gray. For years, Ann Wylie suffered a life that was short of breath and weighed down by an anchor masquerading as an oxygen tank. But from a hospital bed, on Friday the 13th, the Scottsdale woman immediately knew her health had returned when she looked at her skin.

Gone was the discoloration — a symptom of chronic obstructive pulmonary disease. Replacing the gray was a healthy glow.

And with her new lungs delivering air with every inhalation, Wylie, 61, made local medical history. Wylie is the beneficiary of the Valley’s first lung transplant, performed at St. Joseph’s Hospital and Medical Center’s Heart & Lung Institute.

“I feel great. I feel wonderful,” Wylie said during a news conference Monday, the day after her release from the hospital.

Wylie looked healthy, and aside from a white bandage taped to her upper left arm, gave no hint she recently underwent a complex procedure that lasted six hours.

“It’s an operation that involves opening both chests, removing the old lungs and then sewing in the new lungs,” said Dr. Ross Bremner, surgical director of the hospital’s Center for Thoracic Disease. “There’s an extensive amount of surgery involved ... but the operation went very smoothly.”

“They haven’t been performed here in the Valley, because the population here has grown so quickly our medical infrastructure has been, perhaps, a little bit outgrown,” Bremner said. “I think it’s high time that we have a lung transplant program here, and we’re very excited.”

Currently, this is the nation’s only stand-alone lung transplant program, as other facilities transplant other organs.

The center’s arrival nearly came too late for Wylie. A two-pack-a-day smoker for more than 35 years until quitting at age 55, her lungs were damaged by emphysema and for the last five years she felt “terrible, 24/7.” Cooking and playing with her grandchildren were chores.

“I couldn’t walk from here to there without losing my breath,” Wylie said.

Her husband, David Wylie, spoke of the stress created by her oxygen tank, its plastic tube snaking up to her nose. It saved her life, yes, but it also inhibited their lives by curtailing shopping, traveling and visiting friends.

It has been more than two years since Dr. John Nigro, director of the Congenital Heart Center, thought of establishing a lung transplant program here. It was difficult cutting through the layers of bureaucratic red tape, he admitted, but he knew the Valley’s growth boom had created a tremendous demand for such a facility.

Roughly 10 to 20 lung transplants are needed annually for every one million people, Nigro said. The population of the Valley exceeds 4 million, meaning there are 40 to 80 potential transplant candidates.

Before this center opened, most people in need of a transplant would travel to programs in California, a hospital spokeswoman said.

Doctors had Wylie prepare for the procedure by strengthening her body through three months of cardiovascular work and light weights. At first, this was a task that seemed impossible.

Two minutes of a light walk on the treadmill, “I thought that was going to kill me,” Wylie recalled.

Finally, the day of the operation arrived. On April 13, Wylie was put under anesthesia and the medical experts went to work.

The lungs came from a local donor, although Bremner said privacy policies prevented him from revealing more.

When she awoke surrounded by family Wylie instinctively reached to her face for the oxygen tank’s hose. It wasn’t there.

For the first time in years, Wylie was healthy. And pink.