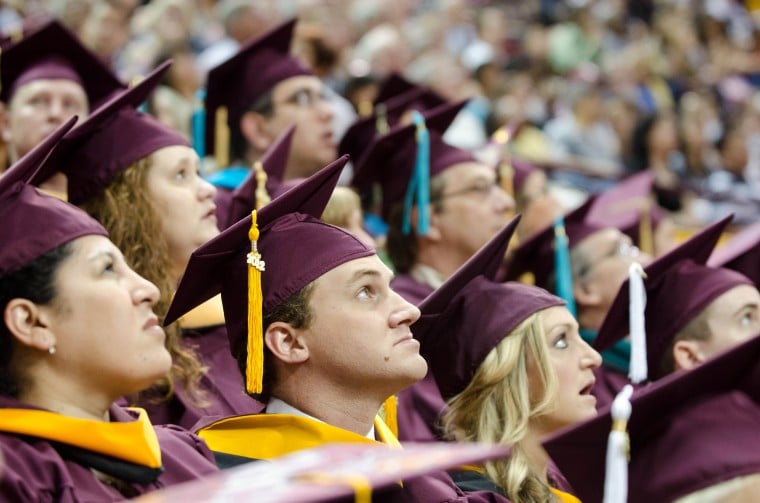 Arizona State University's graduate commencement ceremony inside Wells Fargo Arena on Wednesday, May 2, 2012 in Tempe. [Angela Piazza/ For the Tribune] 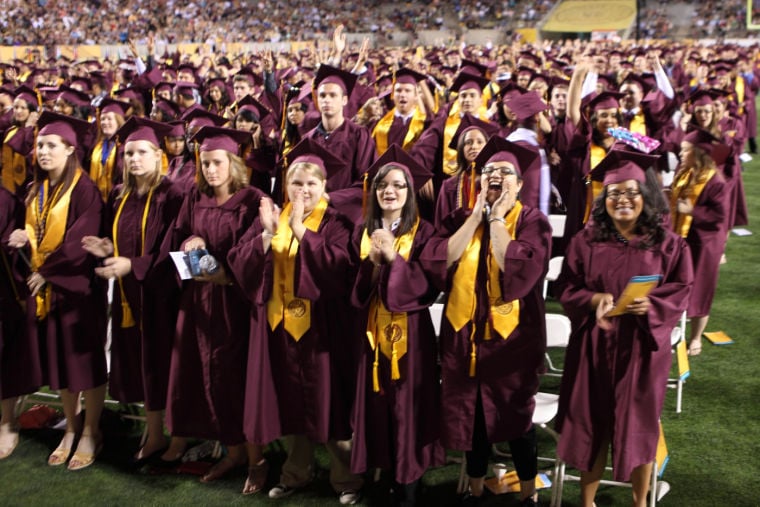 ASU graduates celebrate during a commencement ceremony, Thursday, May 9, 2013 in Tempe. [Jerry Burch/Special to Tribune]

Arizona State University's graduate commencement ceremony inside Wells Fargo Arena on Wednesday, May 2, 2012 in Tempe. [Angela Piazza/ For the Tribune]

ASU graduates celebrate during a commencement ceremony, Thursday, May 9, 2013 in Tempe. [Jerry Burch/Special to Tribune]

Arizona’s four-year public universities had the nation’s largest in-state tuition and fees increase over the past five years, according the nonprofit organization that oversees the SAT.

The College Board’s report said in-state tuition and fees in Arizona increased 70 percent when adjusted for inflation from academic year 2008-09 to 2013-14. The national average was 27 percent.

Out-of-state tuition and fees in Arizona increased 28 percent during the same period, 11th highest in the nation. Louisiana, which had a 69 percent increase, was highest. The national average was 19 percent.

In-state tuition and fees for Arizona’s two-year public universities increased 20 percent during the same period, 21st highest in the nation. The national average was 28 percent.

At ASU, tuition and fees for this academic year’s incoming freshmen topped $10,000.

“This is insane,” Laura Kuegemann, a freshman nursing student, said when told about the College Board’s report.

She said tuition is so high that she can’t afford to live on campus, forcing her to commute more than three hours a day to save money.

“I’m going to get another job if I can find one,” she added.

ASU President Michael M. Crow has announced that the university isn’t seeking a tuition increase for next school year.

Rick Myers, chairman of the Arizona Board of Regents, said tuition at Arizona’s public universities is still at the average of its peers in other states because it started from a lower point.

“We can’t continue to keep raising tuition like we have in the past or we are going to make education unaffordable,” he said.

Myers said the board has worked hard to keep tuition as low as possible, adding that grant and scholarship aid at Arizona’s universities is 15 to 30 percent greater than the average of peer institutions.

“We understand that every dollar per tuition is coming from a family that has other responsibilities, but at the same time we have to have enough money to provide the quality of education,” Myers said. “There is this balance of maintaining quality and maintaining access so that people in Arizona can get that quality education.”

For this academic year, the regents approved tuition and fee increases of 3 percent at Arizona State University and the University of Arizona. They approved a tuition increase at Northern Arizona University of between 2 and 5 percent.

Bill Hart, a senior policy analyst at Arizona State University’s Morrison Institute for Public Policy, said there is a correlation between the decline in appropriations and the increase in tuition.

“It’s not a new phenomenon,” Hart said. “It’s gotten more severe even before the recession and then during the recession, but it’s also part of a long-term trend in Arizona.”

“The federal government has stepped in to back up student loans, and they’ve done so to such a degree that in the big picture there is no incentive for colleges and universities to make their tuition any cheaper,” he said.

Butcher also said there is no incentive for a university to cut tuition because students often consider higher education a gateway to jobs.

“A kid may say, ‘I’m going to borrow money no matter what it’s going to mean for the rest of my life because I’ve got to go to college to get a job.’” he said.

Adam Monroe, board chairman of the Arizona Students’ Association, said in an e-mail that increased tuition and fees mean some students graduate with enormous debts, which he said is bad for the economy as a whole.

“Students are already paying more than their fair share. Forcing students and their families to proportionately pay this much for a public good hurts everyone in the long run,” he said.