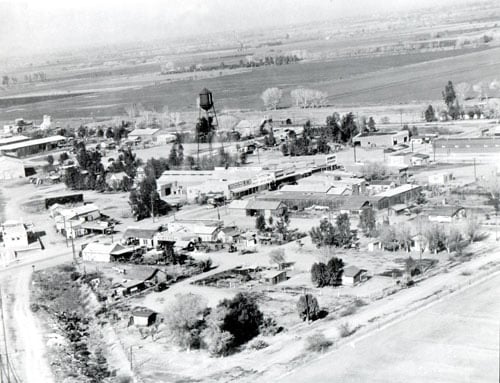 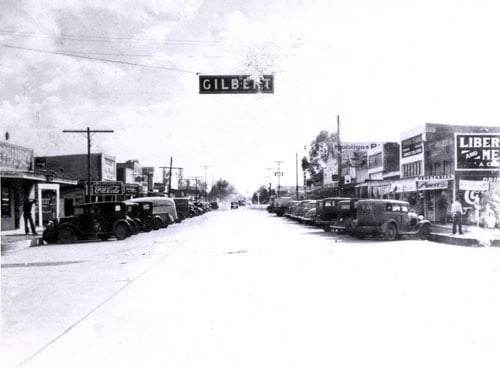 In this photograph of downtown Gilbert taken in the 1940s, the original Liberty Market can be seen on the far right. 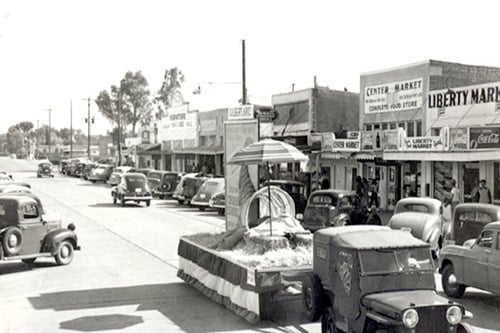 In this photograph of downtown Gilbert taken during a parade in the 1940s, the original Liberty Market can be seen on the far right. 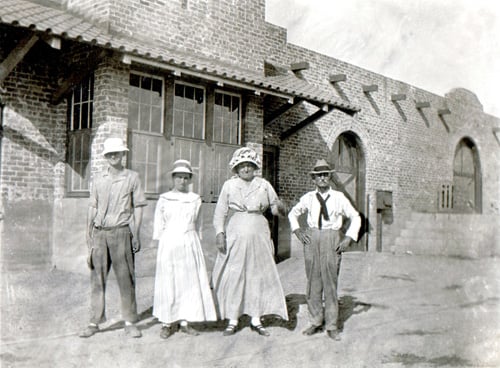 Four people pose for a photograph at Gilbert’s train depot in 1918.
1 of 4

In this photograph of downtown Gilbert taken in the 1940s, the original Liberty Market can be seen on the far right.

In this photograph of downtown Gilbert taken during a parade in the 1940s, the original Liberty Market can be seen on the far right.

Four people pose for a photograph at Gilbert’s train depot in 1918.

When Marji Scotten was growing up outside of Gilbert in the 1950s, a crop duster plane crashed on her farm. Because they had no telephone, her mom told her to ride her bicycle to the neighbors to call authorities.

"I told them there was a plane crash in Gilbert, and they said, ‘Well, where is Gilbert?' They didn't now where Gilbert was, so I had to explain to them how to get here."

Today, there's nothing obscure about Gilbert, a town of more than 220,000 people living within 73 square miles. On Tuesday, Gilbert officially marks the 90th birthday of its incorporation.

Longtime Gilbert residents recall a small town, surrounded by alfalfa fields along a Southern Pacific rail line, that grew little until 1970 when town leaders embarked on an ambitious annexation of 53 square miles of county land. In fact, the town's official population was just 1,971 before that expansion began.

Scotten said it was only 1,800 in 1951 when her family moved to their farm on Guadalupe Road near Val Vista Drive where the Freestone Recreation Center now stands.

"There really wasn't anything to do in Gilbert because there was no movie theater," she said. "Every Friday night, we'd go to the Pioneer Drive-In Theater (on Main Street west of Country Club Drive) in Mesa. A lot of activities centered around school, but those were not very often."

For many years, only Gilbert and Elliot roads were paved, Scotten said. And when the Gilbert Days celebration and parade began in 1959, paving came to side streets.

"The parade lasted about a minute and 37 seconds - they weren't very long," she said. By the 1970s, the parade had expanded. The parade marshal one year was Amanda Blake, who played "Miss Kitty" in the popular "Gunsmoke" TV series.

"The best part of Gilbert Days was the barbecue they had at the American Legion," Scotten said. "They would cook this meat underground for days."

Historian and former Mayor Dale Hallock, who moved from Oklahoma with his family in 1936, recalls a community where the real population was on the area farms. "There weren't too many people who lived inside Gilbert," he said. Downtown Gilbert was modest with a large lumberyard and as many as four grocery stores.

Hallock, mayor from 1971-76, published a pictorial book on the town in 2007, "Gilbert Arizona: From Cowboys and Sodbusters, A Mega Residential Community." He laments that the railroad tore down the landmark depot in 1965. "Of course, it is what put Gilbert on the map." Later removed was the prominent sign downtown that proclaimed Gilbert, another regret.

"We swam in the canals, but, in 1947, when the guys came back from World War II, they organized the Gilbert Jaycees chapter, and they built the Gilbert swimming pool, which is where the senior center is now," Hallock said.

He recalls a third of the population was Hispanic, and, for 20 years (1929-49), their children attended the Gilbert Mexican School near what was then Gilbert High School, later converted into the school district's administration building. For a time, until the early 1930s, black children attended the Negro School in a house near the still-standing city water tower. Later, Gilbert's black youngsters were bused to a school in Mesa, while those in high school were sent to Carver High School in Phoenix, Hallock said.

Doris Gregory Lane arrived with her family from Texas in the early 1940s.

"Downtown Gilbert was just a wide place in the road," she said. "On Saturday night, they had a platform downtown for dancing and music. They would play guitars, and they would get out there and they'd do the old family hop-hop. It was like square dancing, but it was just a jump-jump."

Lane, 84, said she was a Methodist who married into a Mormon family, who disapproved of the dancing. "My husband didn't believe in showing off in public, but we went down there and viewed it because it was really attractive," Lane said.

"When I came to Gilbert, I lived by a canal. And every time it got hot, mother would walk us down to the canal and we'd jump in and float down. Then she'd drive down in the car to get us and go back home."

Lane recalls Gilbert having a movie theater where tickets were just 10 cents.

"I met my husband working at the '76 station that dad owned," she remembered. Lane went to night school to complete her high school diploma.

June Neely Morrison has lived in Gilbert since 1924. "I remember a very simple life," she said. "I lived three-fourths of a mile from town, and my folks liked it that way." She walked to school with neighborhood children. Without sidewalks, the route was on the berms and end rows of corn, cotton and alfalfa fields.

She recalls the old Gilbert post office with its combination locks and the benches outside along the south side where older men "sat in the winters sunning themselves and talking."

She estimated that 95 percent of the community was related to agriculture. Morrison said the Great Depression brought 25 percent unemployment and many people riding the railroad into Gilbert looking for help.

"They would come here to our house, because we were not too far away from the railroad track. ... My mother would always have food for them. She would have a plate of food for anybody who came to the door."

Morrison remembers how kids would ride horses into the desert for a day at a time without much concern and how youth played many "self-made games." Some played jacks, Annie-over, marbles, games with baseball cards or the boys game of mumbletypeg where pocket knifes were flung into the ground with precision without striking one's own foot.

Morrison recalls the craze when Monopoly came along. "Now, that was a biggie."

Morrison and late husband Marvin, twice named Arizona's Agriculture Man of the Year, watched as area alfalfa and cotton farms were sold off for development and the town once known as the "Hay Capital of the World" grew into a major city.

"I remember my husband saying, as we looked toward Gilbert, ‘You know you are going to be an old so-and-so if you don't sell this place one of these days.' We were within a half-mile of Gilbert Road and we still are. Marvin knew there were big changes coming."

When Andy Bernal rides in the Gilbert Days Parade on Saturday, he will probably take a moment to remember when the event was a modest processi…

Chains surround the entrance gate. The projection house is empty. Parking lots are desolate. And the six gigantic white screens are a blank, l…

There is no Gilbert, Arizona anymore to those of us who grew up here. There is only the Gilbert that was controlled and manipulated by the powers that be,(or were) most of which have probably made their fortune(through real estate of course) and have moved to the carribean or something. The Gilbert that exists now is great for those who have moved here and have no previous recollection of how great this little town really was...I wish I was in a position to understand the intentions of the town council back in the day and do something about it, but eventually resistance would have been futile against the almighty dollar..All good things must come to an end.. I never believed that when I was young....

Interesting article. However, Marji Scotten didn't get the location of the Pioneer Drive-In quite right:

"Every Friday night, we'd go to the Pioneer Drive-In Theater (on Main Street west of Country Club Drive) in Mesa."

The Drive-In was actually located at 2165 W Main St, which is west of Dobson (2 miles further west than the location cited). After being abandoned as a Drive-In, the current Midtown on Main apartments were built (originally Pelican Bay apartments) sometime around 1986-87 at 2121 W Main St.

I love what Gilbert has become and I am proud to live here. I enjoy the downtown area and am glad to see how vibrant it has become. I have met so many nice and wonderful people who have moved into the town and am lucky to have so many new friends. I still leave my home unlocked and have never installed an alrm system. Forme, Gilbert is home and always will be. Thank you for the awesome article Lawn. [smile]

Its a shame,some of us miss old Gilbert and the downtown area. So much for progress. Now when you go out you need to lock your doors and set your alarm system. Nice! Huh!