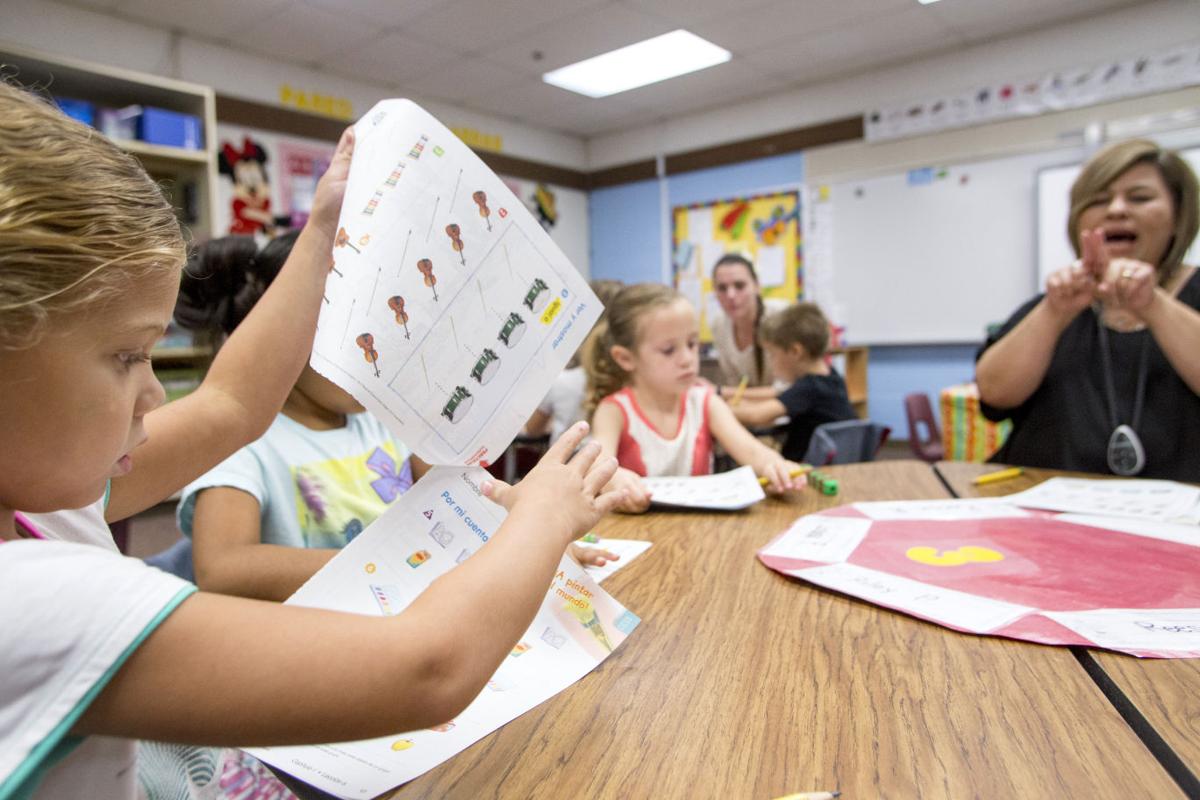 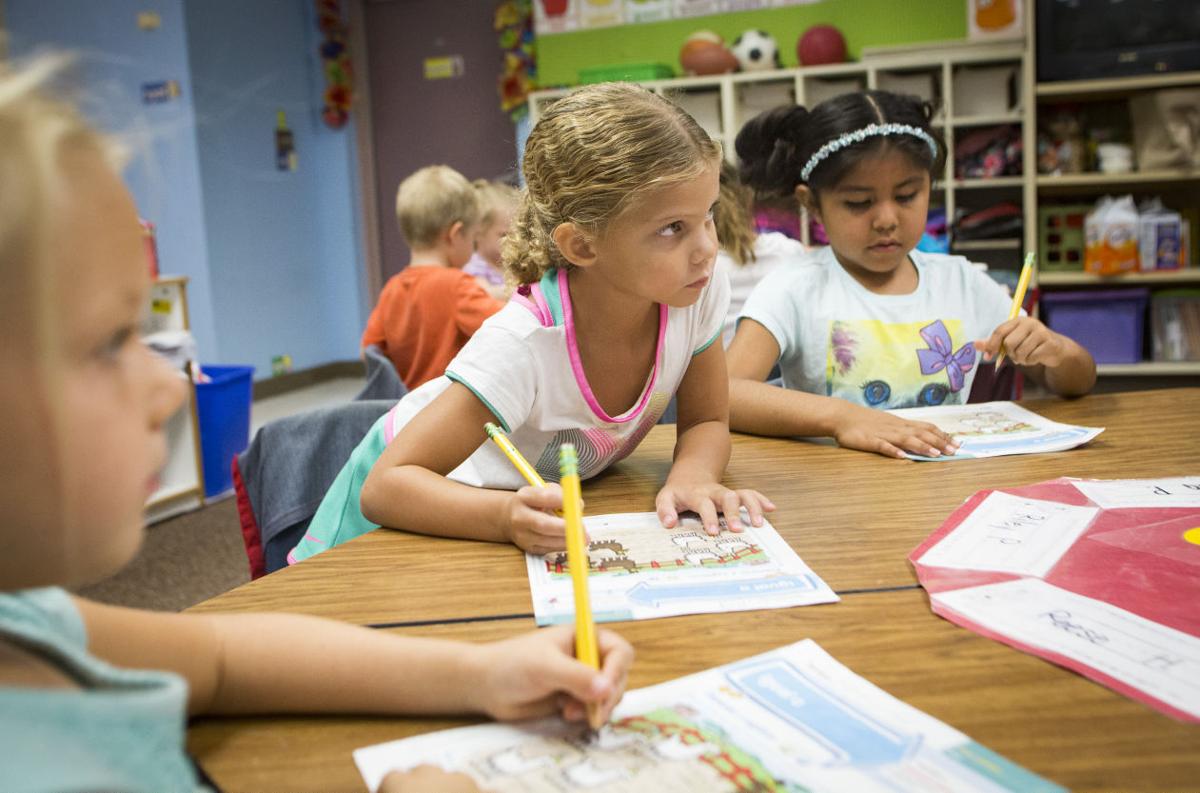 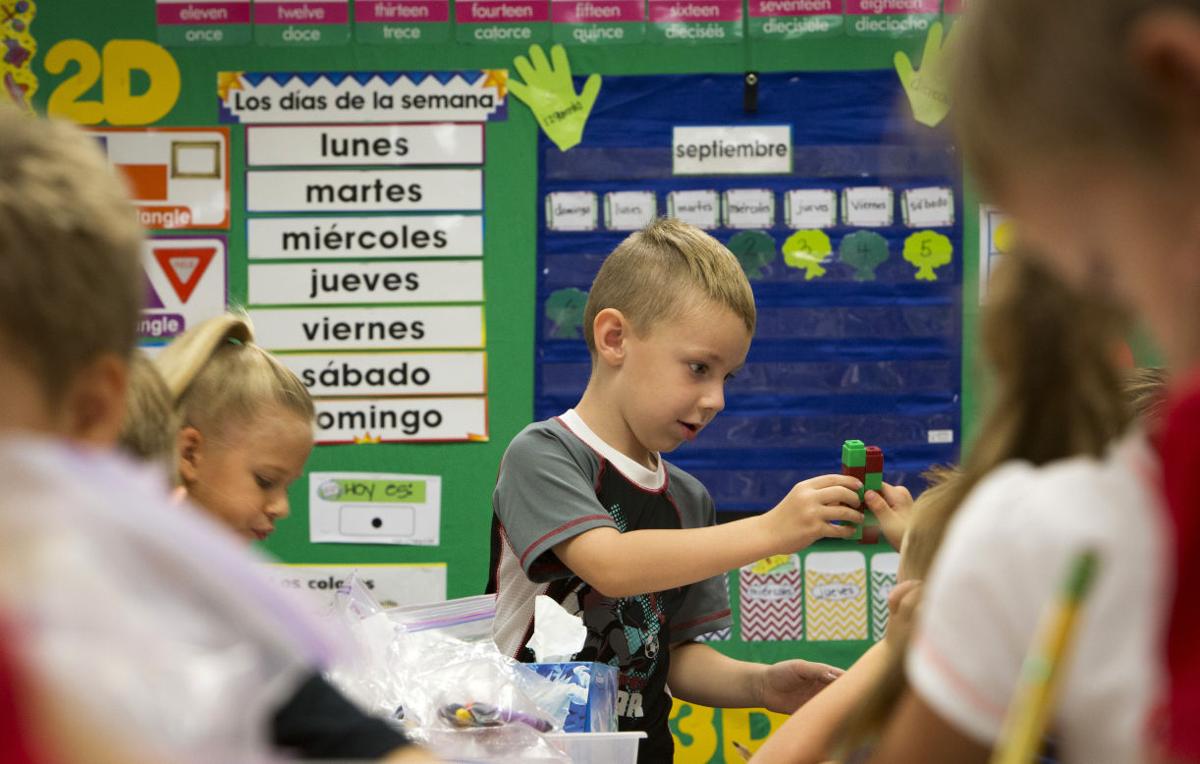 Rudy Smith works on his numbers and matching in the kindergarten dual immersion Spanish class at Hermosa Vista Elementary School in Mesa on Wednesday, Sept. 9, 2015.

Rudy Smith works on his numbers and matching in the kindergarten dual immersion Spanish class at Hermosa Vista Elementary School in Mesa on Wednesday, Sept. 9, 2015.

There is a constant drive among educators in America to ensure that students are as prepared to compete in the global workforce as students from abroad.

Yet, a distinct disadvantage lingers over Americans — too few of us speak any language besides English.

In a world increasingly linked, where it is often necessary to work with English and non-English speaking people, speaking a language as common as Spanish can set a person apart from the fold. And, setting their students apart from the rest is exactly what educators at Hermosa Vista Elementary School in Mesa are attempting to do.

A language immersion program at such an early age is what makes the greatest difference, says kindergarten teacher Sherry MacEwen.

“Kindergartners are really able to absorb language skills the best at that age, and to give them that extra edge by beginning so early is an amazing opportunity,” she said. “I have three kids that went to Mesa Public Schools who all took Spanish and I always thought that if they could have only started in kindergarten they would be so much further along.”

The program was developed last year after MacEwen and school administrators began studying similar programs used in Utah public schools and the Cave Creek Unified School District. District personnel and parents met their proposal with enthusiasm and support. In fact, the program has proven so popular that all 50 spots were quickly filled and a waiting list established.

“There has been no external mandate that we have had to follow,” said Principal John Trezise, who is in his second year at Hermosa Vista. “This has been a real grassroots effort for this community and a real success.”

The plan is to gradually expand the program, adding one grade each year so the students in the program this year can follow it through all six grades at Hermosa Vista. Plans are in the works to have junior high programs in place by the time this batch of elementary students move on.

The program boasts more than academic success. There is an honest hope among the educators that it will help Spanish-speaking students become more engaged at school.

There is an achievement gap between Hispanic students and white students at Mesa schools, says Trezise, and there is the belief that by engaging students who perhaps speak Spanish at home and who have Hispanic heritage, the program can prepare them for them for future success.

“In Mesa we sought at the beginning of the year to close the gap and I think this program will help those children because they would understand their native language while learning the skills they need to be competitive,” said Gabriela Humes, the kindergarten teacher who will be teaching the Spanish language portion of the program.

With more than one in four of Mesa’s residents being of Hispanic heritage, the teachers hope the program can help teach non-Hispanic students about another culture while providing an environment where Hispanic students can share and be important members of the class.

“Spanish-speaking students have a lot to gain from this program,” MacEwen said. “At that age they are not being taught conjugation and verbs at home, so they have a chance to improve their Spanish while being great mentors in the program.”

The immersion program could eventually be incorporated at other schools, making knowledge of a second language the standard rather than the exception.

“What we would like to see is this whole conglomerate of Northeast Mesa schools to develop this program and for us to begin working in closer partnership with them and their students,” Principal Trezise said.