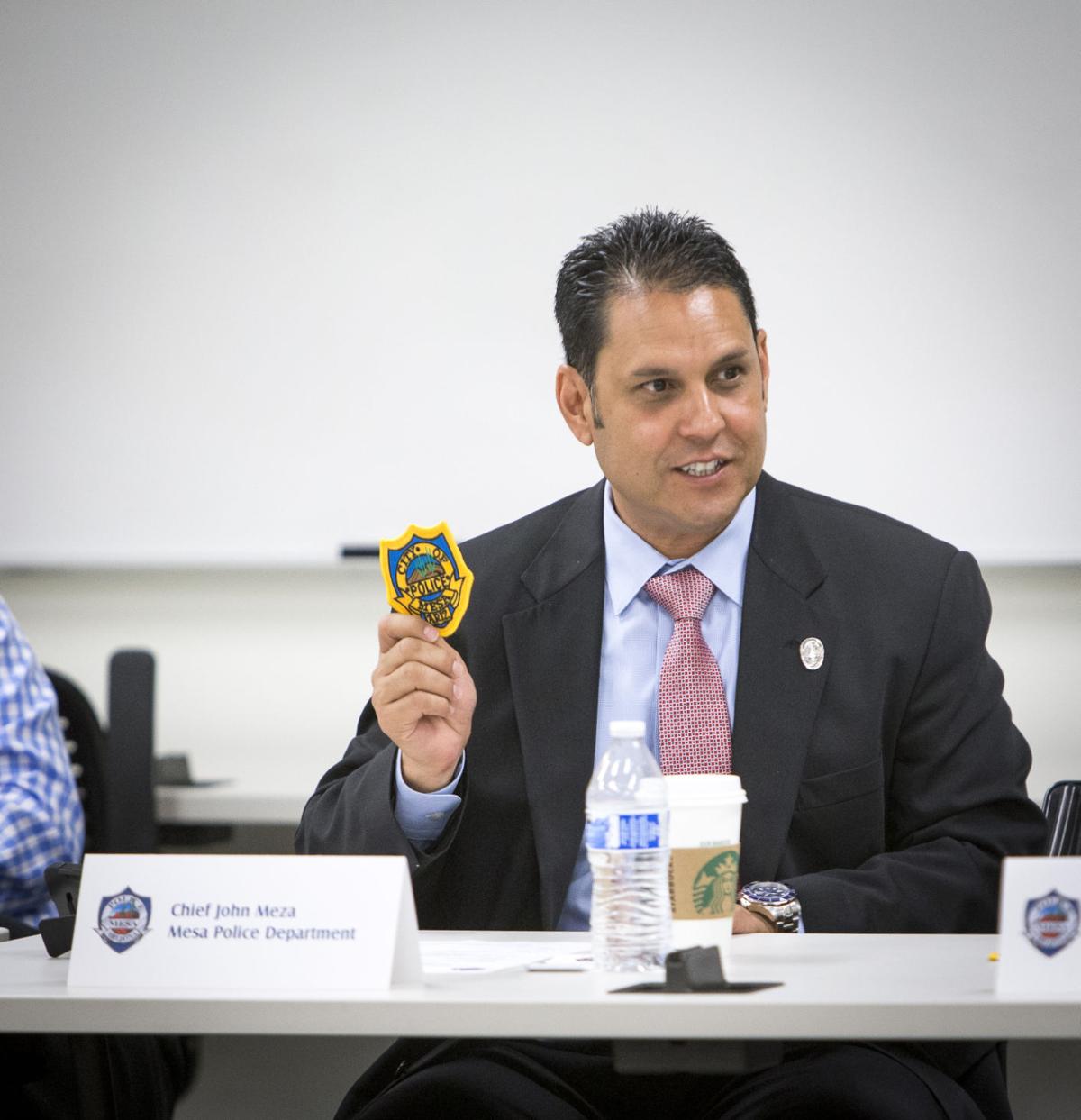 Mesa Police Chief John Meza holds a police patch during a roundtable discussion with the media on Wednesday, Sept. 23, 2015. 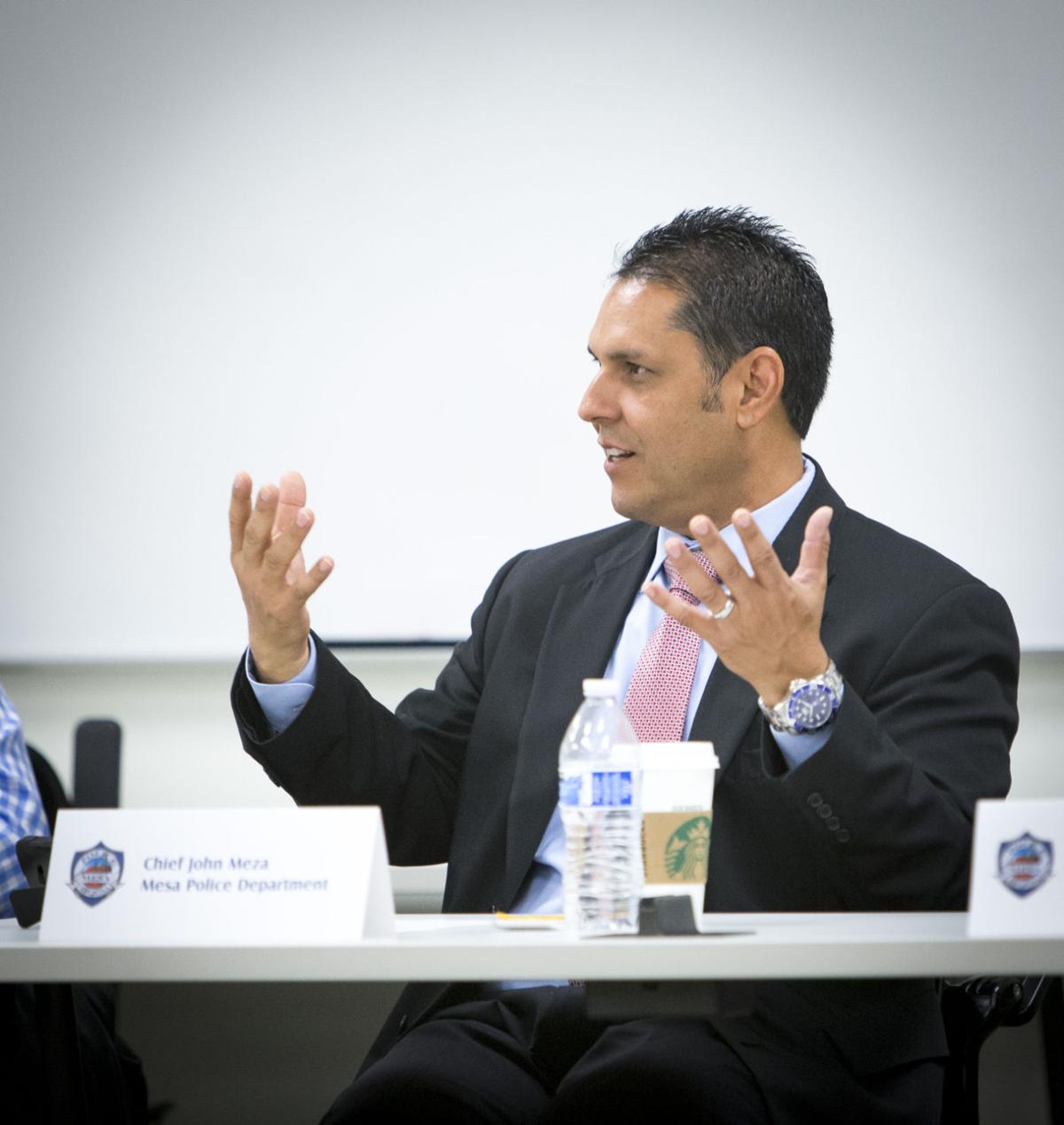 Mesa Police Chief John Meza during a roundtable discussion with the media on Wednesday, Sept. 23, 2015.

Mesa Police Chief John Meza holds a police patch during a roundtable discussion with the media on Wednesday, Sept. 23, 2015.

Mesa Police Chief John Meza during a roundtable discussion with the media on Wednesday, Sept. 23, 2015.

By mid-2016, all Mesa Police Department patrol officers will be equipped with body cameras.

Mesa Police Chief John Meza said the department now has 150 cameras in use, just bought 100 more which will soon be in use and will purchase 100 more next summer “so everyone in patrol will have” a camera. When the purchases are complete, Mesa will be the sole large police department in the Valley to have all its patrol officers equipped with cameras, he said.

Buying the cameras has been an expensive venture, the chief said. Each camera costs about $600, Mesa Police Media Relations Detective Steve Berry said. Plus, the department has to pay for online storage of the files.

Berry was complementary of the city administration and City Council’s support of the police camera policy and the approval of money to buy the equipment and storage space.

And, many complaints were mitigated within days because of the presence of video, according to the report.

Current policy calls for officers to have the cameras on essentially any time they have contact with a person.

“Common sense prevails,” Berry said. “In general, we want to have the camera running.”

Officers are required to explain to their supervisors any gaps in recording.

There is more than one style of camera used by the department, he said. Some wear cameras mounted on their glasses, motorcycle officers use cameras mounted on their helmets and some cameras are worn on an officer’s shoulder. But, all turn on with a simple push of a button, Berry said. And, the cameras have the ability to provide video for 30 seconds before actually being activated. However, no audio is recorded in those 30 seconds.

Mesa stores its camera files on a secure website managed by Taser, Berry said. At the end of every shift, officers dock their cameras, which downloads the recordings and charges the battery. When that process is finished, the camera’s memory is erased, too.

Officers can’t alter the stored files. And, any time anyone looks at any of the videos, the time, date and viewer’s name are recorded, he said.

“The security is everything,” Berry said. “It’s evidence and evidence has to be secure or it’s no good.”

Department policy makes it clear that the camera recordings supplement department reports, which officers are still required to complete.

Meza recently spoke to the media about other department issues.

He became chief in March and said one of the first issues he decided to address was employee wellness.

“Our employees need to be healthy to do their jobs,” he said.

“Every day we need a commitment to the community,” he said. “We’re building on a positive culture that builds respect.”

“We’ve had community policing for years, but now we explain why we do what we do and it builds relationships,” Soelberg said.

Police departments in the East Valley are ahead of the curve with introducing body cameras to their patrol officers.