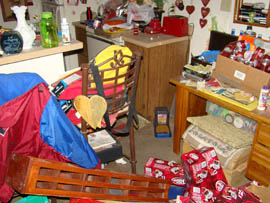 This Tempe Fire Department photo shows an apartment where firefighters discovered items accmulated by a hoarder. 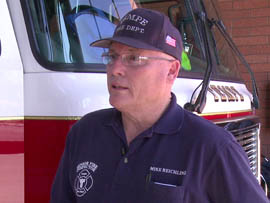 This Tempe Fire Department photo shows an apartment where firefighters discovered items accmulated by a hoarder.

TEMPE – Firefighters had no reason to suspect anything but a house fire, but when three of them walked up to the front door, an explosion hit them with a wall of flame. Two were injured, including a fire captain burned on his face and hands.

It turned out that rooms in the house were piled high with newspapers and household items that helped the fire spread quickly. An older couple who live in the home were hoarders – people who accumulate items and sometimes animals to the degree that they overwhelm their homes.

There have been five hoarding-related fires in Tempe alone in the past six months, and offiicials and first responders call that a symptom of a rising problem as Arizona’s population ages.

“We go into these homes that have medical issues, and we have barely enough room to get to the patients; it delays our response,” Reichling said. “I’ve been in situations where there’s been only a little pathway and the materials were stacked from the floor to the ceilings, even in the attics, every closet, inside the ovens, inside the bathtubs.”

Kristen Scharlau, coordinator of Tempe’s Care 7 Program, which responds to crises involving residents, said that the comfort provided by hoarding behavior can be a symptom of larger mental health issues.

“The behavior is staying comfortable with their possessions and not having the ability to get rid of something because it causes them anxiety and stress,” she said. “Those people are really hesitant for any kind of change.”

Hoarding behavior can be triggered by abandonment, financial fears or emotional trauma. Without finding help or wanting to change, hoarding can lead to serious problems.

“It’s really hard to keep their home clean – they can’t get to all the surfaces to clean it,” Scharlau said. “It becomes a dangerous situation for their health and for the health of any pets they may have and also for any kind of responding agencies.”

Scharlau said recovery includes understanding, counseling and help with the overwhelming process of cleaning up.

Debbie Meyer became familiar with hoarding through her relocation business, Moving You Simply, which helps people downsize and organize their houses.

Meyer said she handles about 10 cases of hoarding each year, but she’s already seen five or six this year.

“We just did one the other day – she fell, can’t go back,” Meyer said. “Her friend let us into the house and the dust – it’s nasty, filthy.”

“Nothing fazes me,” Meyer said.

Finding out the story behind each case is part of the experience, Meyer said.

“You’re not born to be a hoarder; something’s snapped in your life,” Meyer said. “People hoard because they’re fearful of the outside world.”

Irene Yurko-Goldberg contracted with Meyer to help a friend whose house was piled high with clothes and documents and had two refrigerators stuffed with rotting food. Each time she tried to help, the house just filled up again, and finally she called in Meyer when the friend fell and needed to move to an assisted-living facility, she said.

“I could never get her organized, but that’s all we ever did,” she said.

Scharlau said because change is difficult for hoarders, it’s important for friends, relatives and neighbors to learn about hoarding and how to get people the help they need.

“It’s about recognizing the signs and the symptoms and knowing where to direct people,” she said. “There are so many people who can help.”

– American Society for the Prevention of Cruelty to Animals: www.aspca.org