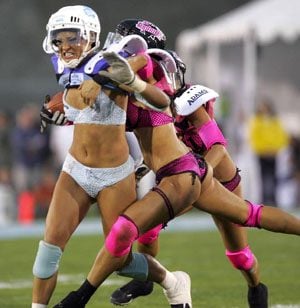 The Los Angeles Temptation\'s Lauren Bergfeld, left, runs for yardage during the Lingerie Bowl against the New York Euphoria at the Los Angeles Memorial Coliseum in Los Angeles, Sunday, Feb. 5, 2006.

The Los Angeles Temptation\'s Lauren Bergfeld, left, runs for yardage during the Lingerie Bowl against the New York Euphoria at the Los Angeles Memorial Coliseum in Los Angeles, Sunday, Feb. 5, 2006.

Lingerie-wearing, tackle-football playing women are planning to descend on as many as four city blocks of downtown Scottsdale during Super Bowl week next year to show off their pigskin and modeling skills during a three-day extravaganza leading up to Lingerie Bowl V.

The Super Bowl halftime competitor is taking the game and activities out of Los Angeles for the first time. They are bringing Jenna Jameson, an adult-film mogul, former Paradise Valley resident and partial owner of Babe’s Cabaret in Scottsdale, as an on-air host, while retired NFL rebels Jim McMahon and Brian Bosworth are slated as the coaches.

The Lingerie Bowl, which has no affiliation with the National Football League, is planning four days of events including the three-day “Lingerie Bowl Experience Village,” which would also feature musicians and DJs, autographs and photo opportunities and the women competing in football-oriented challenges. A fantasy player draft and high-priced party are also planned leading up to Lingerie Bowl V, “The Ultimate Catfight.”

The game itself will be played during halftime of Super Bowl XLII, set for Feb. 3 at the University of Phoenix Stadium in Glendale.

Christopher Martin, a spokesman for Los Angeles-based event producers Horizon Productions, said more details are expected next week, including the location for the game. A local press conference is set for Feb. 28.

Martin said Scottsdale was selected for the Experience Village because it seems like the hub for all the activity in and around Arizona.

“It’s where most of our audience is drawn to,” Martin said. “It’s a hip, trendy area of Arizona and that’s where we fit best.”

Martin said the plan is to have three or four blocks of downtown Scottsdale closed for a few hours Thursday through Saturday afternoon before the Super Bowl. No formal applications have been filed with the city.

The Lingerie Bowl party, “Football After Dark,” will “trump the other big Super Bowl parties,” Martin said. The producers are predicting 3,000 to 4,000 people will attend the party on the eve of the Super Bowl with most tickets ranging from $3,000 to $5,000 each. A location has not been named.

The first three Lingerie Bowls were played at the Los Angeles Memorial Coliseum and aired on pay-per-view television during halftime, but next year the game will air on a yet-to-be disclosed cable TV station that reaches in excess of 80 million customers, Martin said. He said Lingerie Bowl IV was canceled because of the deal with the cable network.

Tom Anderson, owner of Upper Deck Sports Grill on Craftsman Court, said a Lingerie Bowl representative has called and sent information to him about the planned event.

Craftsman Court bar owners between Third and Fifth avenues, including Anderson, are already planning a three-day Super Bowl party with an anticipated attendance of 2,500 people, according to a permit application filed with the city. They have not committed to being involved with the Lingerie Bowl.

“I’m thinking that might be fun,” Anderson said. “I’m going to meet him and see what his plans are.”

Anderson said, however, that the idea of closing down city streets for the village could be opposed by the city.

“I think there would be an uproar on a deal like that,” Anderson said. “It may be a hard time going over to the city and trying to sell the mayor on that one.”

Scottsdale Mayor Mary Manross has been an outspoken critic of the city’s two topless clubs, including Babe’s Cabaret. She led the council to enact tougher regulations, which were overturned in September by Scottsdale voters. Manross also made comments critical of the Pink Taco because of the restaurant’s name, and recently said she opposes off-track betting at Anderson’s bar.

Manross did not return phone calls Wednesday to discuss her reaction to the Lingerie Bowl’s plans.

Scottsdale has yet to receive an application to close streets for the Experience Village, which would be reviewed by a special events committee made up of city employees, city spokesman Pat Dodds said.