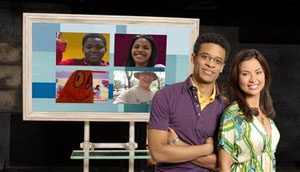 NEW YORK - Ever conscious of a good trend, TV networks and advertisers are increasingly adopting the YouTube model of viewer-created content.

VH1, currently airing the third season of "Web Junk 20," will next month premiere the Jack Black-produced "Acceptable TV," which attempts to fuse TV with the Web. In February, Nickelodeon debuted a two-hour programming block called "ME:TV," featuring contributions from 10-year-olds. TLC last week began a six-part documentary series, "My Life as a Child," where children were given cameras to videotape their lives.

Also, high profile consumer-created ads for Doritos, Chevy and Dove ran during the Super Bowl and the Academy Awards.

But how well can TV play the Web's game? A large part of the appeal of video-sharing sites is that anyone can upload a video in a heartbeat, and that clips of Mentos exploding and men dancing are just a click away. Though now more interactive with on-demand features, television offers far less freedom for the viewer.

Instead, the appeal of amateur video on television is wrapped up in the idea that TV is still a superior medium to the Web - it's the big leagues. You can drop your video into the online wilderness or - as a game-show host might exclaim - "You can be on TV!"

"As exciting as the Internet is, there's still something different and perhaps more glorious about your creation showing up on national television," says Tom Ascheim, executive vice president and general manager of Nickelodeon.

The channel's "ME:TV," which airs weekdays 5-7 p.m. EST/PST, includes videos submitted by kids (with parental permission) and a segment called "Web Wallers" where four participants are shown via Webcam. Co-host Jordan Carlos has called it "the ultimate mash-up of online and on-air."

Reality TV, of course, has been a huge beneficiary of the public's desire to be on TV - as have older shows like "America's Funniest Home Videos" and "Candid Camera." But, now, contestants might shoot, edit and star in video that gets them on a program.

Current TV, now in about 40 million homes, predates the YouTube sensation with its viewer-created "pods," which make up a third of its programming. Joel Hyatt, who co-created Current TV with Al Gore, is understandably a little irritated that his network - which launched in Aug. 2005 - hasn't always been given the credit it deserves.

"We pioneered the concept. We are the only television network totally premised on the concept of viewer-created content," says Hyatt. "We believe that for all of the enormous importance of the Internet, it is nonetheless still a fact that television is an extraordinarily powerful medium."

Hyatt says Current purposefully wanted to level the playing field in television, rather than unveil itself as a Web site. (Current does boast a robust Web site and plans to launch a full "destination" site this summer.)

But others wonder if TV should stick to what it knows best: professionally created content.

"Television is and has been in something of free-fall for quite a while - just like the movies, just like the newspapers - and they're doing everything they can to reverse it," says Martin Kaplan, professor at the University of Southern California's Annenberg School of Communication.

"So if they see a trend anywhere in any medium, the immediate reaction is, `How do we make this work for us.' It's an understandable, if desperate, attempt."

TV may want to get into the YouTube business, but YouTube is happy to stay online. A spokesman for YouTube said the Google-owned company has no plans "at this time" for distribution on TV.

The advantage of television is strong editorial decision making that can choose the highest quality submissions. VH1's "Acceptable TV," which will begin March 23, will air five videos created by the show's staff writers and performers. On the "Acceptable TV" Web site, viewers can vote on their favorite videos, and the most popular will get a sequel.

Viewers can also upload their own video, and each week, one will get picked to air on "Acceptable TV." Tutorials on how to make a good digital film will also be available - which suggests the amateurs could use some schooling from the pros.

"There's a moment of exhaustion with freeform, throw-anything-up-on-the-Web user content," says Michael Hirschorn, executive vice president of production and programming at VH1. "The dirty secret is that 99.9 percent of it is no good.

"User-generated content is here to stay, but this project wants to set some standards and practices on how you do it right."

VH1 and Nickelodeon are both in the MTV Networks family, which is owned by Viacom. These networks are focused largely on younger demographics, so it's not surprising that they've targeted user-generated content more than most.

"Clearly, there's a directive from on high that this is the direction we should be headed in," says Hirschorn.

Others have also delved into the user-generated pool, including the CW network, MTV and Comedy Central's "The Colbert Report," which invited submissions for a "Green Screen Challenge" last year.

Network news divisions have also increasingly used video shot by citizens with their phones to document events like Michael Richards' racist rant at a Los Angeles comedy club. CNN.com has made it a point to seek out offerings from the public.

Advertisers have also been quick to join the trend and have benefited from news coverage of consumer-created commercials.

It all adds up to a lot of inexpensive, hip programming. Current TV pays $500 per aired pod, which can increase with subsequent selections. "Acceptable TV" promises creators a cut of the online ad revenue. But most contributors see their reward as a chance for self-expression and a slight shot at fame.

As long as that desire to be on TV remains - and as long as the masses are eager to work on the cheap - television is likely to continue to capitalize on viewer-generated entertainment.

"It has huge long-term implications," says Hyatt. "This is not a genie that's going back in the bottle."