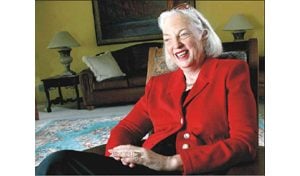 Writer J.A. Jance’s home is on a single floor, but it has many stories.

"This room here was a light sink, a cave," she says of the airy Arizona room, now dotted with leather wing chairs and oil paintings of canyon country.

"The carpet was orange shag, from 1978 — never cleaned. The carpet layers pulled it up, and asked, ‘Should we work around the floor outlets?’ I said, ‘Floor outlets?’ " The previous owners had simply shagged over them. "It’s lucky they never cleaned the carpets because they would have shorted the wiring out and the whole house would have gone up."

After a six-month renovation, the celebrated suspense author guides visitors around a Tucson home trimmed in desert gardens, marble countertops and Saltillo tile as she regales them with tales of the "before" picture: The attic "insulation" that turned out to be old, compressed bark; kitchen windows set narrow and low enough to be night deposit slots at Blockbuster.

"The carpets were so thick with dirt, we put initially our bed here, in the dining room, because it had a parquet floor." From this remote foothold, Jance, her second husband, Bill, and their two Labradors renovated their way outward.

Harrowing tales, but one senses she wouldn’t have it otherwise. Jance has crafted 31 stories where characters prevail against daunting, terrifying and often brutal obstacles. Twenty-nine are published books, including her latest, "Day of the Dead" (William Morrow, $23.95, 370 pages). One, a manuscript, is awaiting publication. And the last story is her own.

"Come on in," Jance says. Six feet tall, with white hair and blue eyes, Jance, 59, breezes through her home with an energy that belies her years. She is a gracious hostess on a busy schedule, and she serves both masters by being pleasantly direct. "Would you like to eat? Because I haven’t eaten, and when I don’t eat I get cranky."

Bisbee-raised, Jance won a scholarship and was the first in her family to attend a four-year college. Her ambition to be a writer was thwarted by her first husband, an aspiring writer "who imitated Hemingway and Faulkner by drinking too much and writing too little," she explains.

"He informed me there would only be one writer in the family — and he was it." When he was accepted to the University of Arizona’s creative writing program, Jance was not. "I wasn’t a man," she says.

Instead, she taught English at Pueblo High School in Tucson before becoming the youth librarian at the Indian Oasis School District at Sells. But Jance’s path took a frightening twist on May 22, 1970, when a stranger offered her husband a ride to their home, in a remote area outside Tucson. "He dropped my husband off, and asked: ‘You leave your wife all alone out here?’ " she recalls. "He said, ‘Well, she has the dogs to protect her.’ "

They soon learned this stranger had, minutes earlier, pulled a woman from her car, then raped and murdered her in front of her children. "He was a serial killer," says Jance, "who struck at 2:20 p.m. on the 22nd of every month." A detective advised them to leave the area. But finances required her husband to leave in search of work while Jance continued her job and stayed in the house alone.

For two excruciating months, she developed the keen awareness of one being stalked.

"We suspected his intentions," she says. "We saw strange tire tracks — whoever had watched us had backed up over a mile to do it, because headlights could’ve been seen from the house."

She came and went from work alone, carried a gun. ("I was ready to use it, although I’d once shot at a rattlesnake from four feet, and missed," she says and laughs.) She primed their well when the water ran out. "I learned something about myself, then," she says. "If I could get water in the desert, I knew that I could take care of myself."

The man was finally arrested on July 20, and freely admitted that Jance’s home was his intended target for July 22. A chilling near-miss like that might paralyze others, but Jance had too much to do.

"I had two children and an alcoholic husband," she says. "I didn’t have time to be afraid, so I buried it." She supported the family as her husband’s drinking escalated, and vented her feelings in poems, written at night when he was asleep.

Things came to a head in 1980: "At my son’s T-ball game, my husband was so drunk he had to crawl back to the car," she says. "That’s when I realized: Eighteen years of loving this man hadn’t fixed him. It was time to save my family."

She divorced him, moved with her children to Seattle and began selling insurance to support herself and the kids. At a Dale Carnegie course, she had to speak about "a lifechanging moment."

She chose the stalking.

"Somebody told me, ‘You should write a book.’ " So she wrote a thinly fictionalized account of the ordeal. It took her a year, writing mostly between 4 and 7 a.m., before the children woke up. Then she turned the story — part fiction, part painful life experience — over to editors and awaited their verdict.

"They told me all my reallife stuff was phony, but the stuff I made up was good." Twenty years later, this still prompts Jance, a New York Times best-selling author, to burst out laughing.

"Well, it told me, at least, that I was a pretty imaginative writer."

GRIST FOR THE MILL

"Day of the Dead" draws heavily upon Arizona locales and the Tohono O’odham culture as the family of former sheriff Brandon Walker is led into the path of serial killers and a string of murders dating back to 1970. Her books feature evil characters confronting resourceful innocents, against familiar backdrops like southern Arizona and Seattle, where she also keeps a home.

"It’s amazing to me, and not at all conscious, how elements of my life re-create themselves in my work," she says, acknowledging that one of her favorite villains was an evil creative writing professor. Life itself has been her most influential teacher — although she happily accepts the feedback from editors and the many readers who invest so heavily in her stories.

"I am a storyteller," she says. "I don’t have any highfalutin ideas about what I do. So I’m willing to take direction."

Flexibility and determination have allowed her to ride out turbulent times while her aspirations and fortunes reinvented themselves. Jance’s second husband is a strongly supportive partner. The University of Arizona recently awarded her an honorary doctorate of humane letters. Stalkers stay confined to the laptop now, which she carries to her office, pool, or desert garden — wherever the light is good and the temperature kind. There, she types their fate.

"I don’t plan. I don’t outline. I have hated outlines since sixth grade geography — and I can’t do Roman numerals," she says with a laugh. In literature and life, she is her own first audience, and premeditation . . . it kills the suspense.

"I just like to see where the story goes."