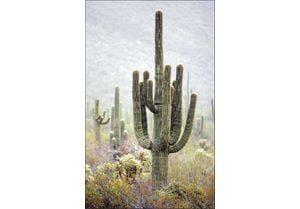 When most of us gaze upon the mighty saguaro, we see a strong, stately symbol of our desert home.

When Joe Mulhatton saw the indigenous Sonoran cactus, he saw only menace, only evil.

It has been more than 100 years since Mulhatton, a miner and traveling salesman, terrified the Southwest with reports of his discovery of a magnetic field of saguaros in the triangular swath of desert between Florence, Casa Grande and Mesa.

Negatively charged saguaros were even worse, he said. They would repel your body, flinging it into a waiting, positive-charged counterpart. He told the story of two tramps who in 1899 had taken refuge in a field of the mighty beasts, only to be batted around, skewered and ultimately digested by them.

His story must be true, since it appeared on the front page of the newspaper — the Casa Grande Dispatch, to be exact.

OK, so maybe Mulhatton had a tendency to stretch the truth (he spent several months at a time in the Territorial Asylum in Phoenix), but he did get one thing right: Saguaros have a mystical quality about them.

Maybe, says Arizona historian Marshall Trimble, we are enthralled by the saguaro because, except for a tiny patch of California (and northern Mexico), we are the only state that can lay claim to the imposing but gentle giants.

Human fascination with saguaros dates back hundreds of years.

"They were very important to the native peoples who lived in Arizona and used them ceremonially," says Trimble, a Scottsdale resident. "The Pima down south celebrated their new year with the ripening of the (saguaro) fruit and the fermenting of the juices, which they then drank like wine.

"When the padres first came into Arizona, they thought the Indians were having too good a time. They curtailed that particular use for the plant in a hurry."

So saguaro wine isn’t available on your grocery-store shelves. But the Tohono O’odham still harvest the fruit in the Saguaro National Park west of Tucson, then make jam to eat and sell.

Most Valley residents take saguaros for granted, never realizing that the cactuses grow only a few inches per year. The ones that reach maturity are diverse — some are towering, thick-based and mottled with woodpecker holes; others are multi-armed varieties looking as much like a modern-art sculpture as a living plant.

Nan Burn is a wealth of information when it comes to saguaros. As head of the Desert Foothills Land Trust’s Desert Awareness committee, she heads up many of the society’s public-outreach efforts regarding the green giants.

"They’re pretty magical cacti," says Burn, who has lived here since the 1960s. "Against all odds they survive. Each root has about 2,000 seeds and the odds of them germinating are incredibly small. I have great respect for them."

She can rattle off an impressive array of facts: Saguaro needles point a certain way to direct rainfall. The plants prefer southwest-facing slopes, and the side that faces the sun has a heavier wax coating to protect it. They are anchored by lateral, not deep, roots.

Burn is fascinated by the plants because "no two are ever alike and one of the most enchanting sounds is hearing the wind whistle through the saguaro needles."

Up in the north East Valley where Burn lives, and especially in Carefree and Cave Creek, some of the biggest and most spectacular examples of the species can be found. The Land Trust is reluctant to direct the curious to particularly impressive saguaros for fear that the plants or surrounding desert will be damaged.

Of course, the danger isn’t just to the plant.

In 1982, two roommates who apparently were neither particularly conservationminded nor of superior intelligence grabbed their shotguns and ventured out into the desert just west of Lake Pleasant.

One of them decided to blow up a cactus or two, and, finding the first, small one easy, took aim at a 26-foot-tall saguaro that was estimated to be 100 years old. He blasted away, severing a four-foot arm that fell on him and killed him.

Some would call that desert justice.

Most of us have our own tales to tell about the saguaro, though they are far less dramatic. Maybe it was when you first moved to the state, counting them as you traversed the hills coming south on Interstate 17 or navigated the southeastern stretch of Interstate 10 into Tucson.

Or perhaps it is all the ribbing you took when your buddies’ opinion of Arizona as nothing but a vast desert was confirmed by the network’s focus on a lone saguaro every time it went to commercial during Diamondbacks home games in the 2001 World Series.

One of the state’s largest and most visible saguaros toppled over during a summer monsoon earlier this year — a tragedy, say Burn and others, because it will take so long for another to grow to be that size. And as development extends in all directions around the Valley, she says she fears further destruction of her favorite plant.

"We need to respect them a great deal," she says. "They are the signature plant of our desert."

• It takes a saguaro 30 or more years to grow 5 feet and about 75 years before it begins to grow arms. Its life expectancy is about 200 years and up to 300 years. It can weight up to 8 tons when filled with water.

• The holes you see in some saguaros are caused by Gila woodpeckers, who drill the holes to get to the water inside. Sometimes the cactus will seal the holes with scar tissue to prevent water loss.

• Man and development are the saguaro’s greatest enemies, but lightning, root rot and fungi also wipe out many of them. And law enforcement keeps an eye out for rustlers, who sell the fully grown saguaros for $35 per foot plus $50 for each arm. Still, there isn’t been any evidence that they are declining in number, and they are not considered endangered.

• The saguaro cactus is not the tallest cactus in the world. The cardon cactus found in Sonora, Mexico, frequently exceeds 50 feet in height.

• Creamy-white, 3-inch-wide flowers with yellow centers bloom May and June. Clustered near the ends of branches, the blossoms open during cooler desert nights and close again by next midday.

To see a variety of saguaro cactuses, visit Saguaro National Park. The park is composed of two regions, Saguaro East and Saguaro West, located 30 miles apart on either side of Tucson.