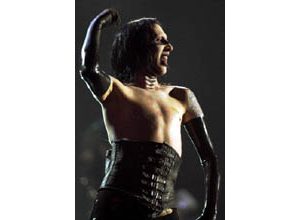 Marilyn Manson performs at the American Music Awards in Los Angeles, Jan. 8, 2001. A civil lawsuit accusing Manson of sexual assault has been dismissed after the two sides reached a settlement.

Marilyn Manson performs at the American Music Awards in Los Angeles, Jan. 8, 2001. A civil lawsuit accusing Manson of sexual assault has been dismissed after the two sides reached a settlement.

DETROIT - A civil lawsuit accusing shock rocker Marilyn Manson of sexual assault has been dismissed after the two sides reached a settlement, according to an attorney for the plaintiff.

Security guard Joshua Keasler was working on the stage during a July 2001 performance in Detroit when Manson allegedly approached him, wrapped his legs around the guard's neck and gyrated against him while wearing only a leather thong and panty hose.

Keasler had sued Manson in U.S. District Court in Detroit for sexual assault and intentional infliction of emotional distress.

Both sides agreed not to release terms of the settlement, Keasler's attorney John D. Nickola said in a statement. The lawsuit was dismissed Jan. 28.

"I can now go on with my life and try to close this unhappy chapter," Keasler said.

A message seeking comment was left Tuesday evening for the attorney who represented Manson when he pleaded no contest in 2002 to disorderly conduct and assault and battery in the same incident.

Manson is known for his outrageous and controversial stage performances. He has broken wine bottles on his chest during performances and ripped a Bible. Band members take their first names from pop culture icons and their surnames from famous serial killers.