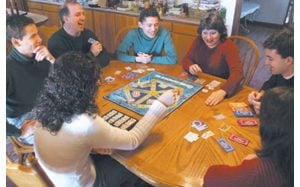 Clockwise from bottom left, Becky, Roy, Steve, Joe, Annette, John and Abbey Economides play a game of “The American Dream” at their Scottsdale home. The Economides’ book, “America’s Cheapest Family Gets You Right on the Money,%2

Clockwise from bottom left, Becky, Roy, Steve, Joe, Annette, John and Abbey Economides play a game of “The American Dream” at their Scottsdale home. The Economides’ book, “America’s Cheapest Family Gets You Right on the Money,%2

As authors of the national newsletter “The HomeEconomiser,” Steve and Annette Economides are used to getting calls for financial advice from people looking to dig out of debt.

But with their first book released today and an appearance on “20/20” scheduled for Friday, it appears the Scottsdale couple and their children are on their way to becoming household names in the arena of financial self-help.

Caught up in the calm before the storm, the Economideses admit they’re not sure just how frenzied their schedule is about to become.

“It’s so weird, all the attention. I hope this rolls slowly,” says Annette, sitting in the living room as her husband takes another call from their publicist at a division of Random House publishing.

Trying to coordinate photo shoots and interview requests to accommodate the whole family — their five children range in age from 12 to 23 — has been one of the biggest challenges, says Annette. “Our two oldest children asked for two weeks off from work so they could be here for (the book launch).”

But she adds that the family knows they’re going to have to set boundaries so they can maintain some semblance of their personal life.

“We’re walking through this for the first time,” says Annette. “We know we cannot go ballistic every time the phone rings.”

They may not be as wellknown as, say, Suze Orman, but the Economideses occupy their own distinct niche: an entire family giving — and living — their advice. “We are a husband-and-wife team and have kids embracing these principles” of responsible spending and saving, explains Annette.

The Economideses don’t have credit cards, Steve says, and by taking time to research the best food deals they can feed their brood for less than $400 a month. The book gives a chapter-by-chapter breakdown of what the family was able to do to be financially successful.

SPREADING A MESSAGE OF HOPE

The Economideses aren’t insulted by being called “America’s cheapest family.” In fact, they say they hope their frugality will inspire Americans — many of whom are mired in debt — to rethink their spending habits.

That message of hope meant a lot to Norma Schneider of Mesa, who, as a single mother of three more than a decade ago, needed to get on a better financial path. Schneider says the year she was coached by the Economideses changed her life. “They gave me a new way of living life with finances and looking at money,” she says. “They made me realize I didn’t have to live paycheck by paycheck. Their principles helped me save.”

• Their book, “America’s Cheapest Family Gets You Right on the Money” (Crown Publishing, $12.95), is available in bookstores.