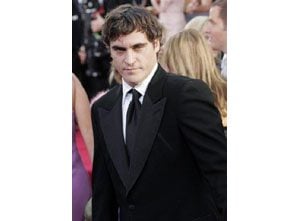 Joaquin Phoenix arrives for the Golden Globe Awards on Jan. 16, 2006, in Beverly Hills, Calif. Phoenix\'s car overturned on a canyon road above the Sunset Strip and collided with another vehicle on Thursday.

Joaquin Phoenix arrives for the Golden Globe Awards on Jan. 16, 2006, in Beverly Hills, Calif. Phoenix\'s car overturned on a canyon road above the Sunset Strip and collided with another vehicle on Thursday.

LOS ANGELES - Joaquin Phoenix's car overturned on a canyon road and collided with another vehicle after his brakes went out, but there were no reports of injury, police said. Phoenix, the 31-year-old star of the Johnny Cash biopic "Walk the Line," was driving eastbound above Sunset Strip about 2:50 p.m. when he realized his brakes were not working, said Officer Jason Lee, a police spokesman.

His publicist, Susan Patricola, said in a statement that Phoenix was wearing his seat belt and walked away from the scene after being helped out of his vehicle by a passer-by.

Earlier this month, Phoenix won a Golden Globe for best actor in a musical or comedy for portraying country legend Cash.

Phoenix is nominated for a Screen Actors Guild Award, which will be handed out Sunday. Patricola told Us Weekly magazine that he will be at the awards ceremony despite the car accident.