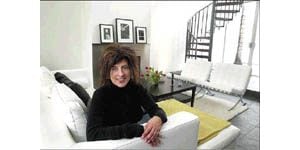 RETURN TO ORIGINAL: Judi Testani sits on a white leather couch in the living room of her Phoenix condominium. Since purchasing it two years ago, Testani has worked to restore the modern vision of the condo’s architect, Al Beadle.

RETURN TO ORIGINAL: Judi Testani sits on a white leather couch in the living room of her Phoenix condominium. Since purchasing it two years ago, Testani has worked to restore the modern vision of the condo’s architect, Al Beadle.

One word to define the modern style of interior designer Judi Testani: Clean. "I’m not a big fan of clutter," said Testani, president of the Testani Design Troupe in Scottsdale.

Punctuated by natural colors, sleek furniture and simple accessories, her touch has brought a seamless look to numerous Valley establishments, including the America West Club at Phoenix Sky Harbor International Airport and Oceana in Scottsdale.

Under the recommendation of a land developer, Casale hired Testani to design the interior of his restaurant, which opened in early 2002.

"We are more of a boutique kind of restaurant, so I felt it was important to get it absolutely perfect," Casale said. "Judi has continually impressed me and surprised me."

Testani was invited back when Furio was expanded two months ago. The result is three separate rooms — bar, sitting area and dining room — joined by the use of steel and dark wood.

"The flow and ergonomics of the place is so much better," Casale said.

After graduating from the School of Interior Architecture at Arizona State University in 1989, Testani worked at several Valley design firms and, most notably, the studio at Taliesen West. Over the years, she developed a niche in the hospitality industry.

"You are creating spaces that people will enjoy," said the 41-year-old. "It is much more defined as a mood setter."

She opened the Testani design group in 1997. Most of her firm’s clients have come through word of mouth — a high-profile grapevine that originated with her work at Tarbell’s and Barmouche in Phoenix, both owned by chef Mark Tarbell.

The exposure those designs brought (Tarbell’s was named Best Restaurant by Food & Wine magazine in 2000) led Testani to her work with Sanctuary on Camelback in Paradise Valley, where she oversaw major interior renovations two years ago. The resort’s main lobby, anchored by elements restaurant and jade bar, was transformed from old Southwest to modern Zen.

"It was like we peeled everything away in that building," Testani said.

Charles Wiley, elements’ executive chef, worked closely with Testani on the design. As a result, the restaurant’s interiors are a deliberate reflection of its menu, described as "American cuisine with Asian accents."

Several requests from elements’ customers have steered her firm into residential design.

"It’s a different clientele," she said, referring to the switch from public to personal spaces.

Among the homes on Testani’s project list: Her own.

Built in 1972 by late architect Al Beadle, Testani purchased the Phoenix condo two years ago. Since then, she has worked to restore the modern vision of Beadle, which had been lost in past renovations.

"I have always felt the most comfortable with the use of clean lines, limited materials and well chosen accessories and art."

A few of Judi Testani’s favorite home and garden stores in the Valley: