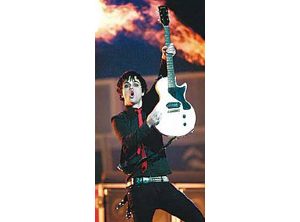 Green Day’s CD "American Idiot" is billed as a punk opera. But that doesn’t mean the band followed the trail blazed 35 years ago when the Who released rock’s first and still definitive rock opera, "Tommy."

"It’s not so literal like that," says drummer Tre Cool, noting that "American Idiot" doesn’t employ the linear storytelling device of most rock operas. "We have to leave it up to the imagination of the listener."

To say the least, "American Idiot" is an audacious statement for Green Day, who in 2004 celebrated the 10th anniversary of their major-label debut, "Dookie." That album, with hits like "Longview," "Welcome to Paradise" and "When I Come Around," became a multiplatinum hit and brought poppunk into the rock mainstream.

"American Idiot" retains the band’s patented brand of hardcharging, hook-filled rock. But "American Idiot" ups the ante, first of all, with the CD’s centerpiece, "Jesus of Suburbia," which essentially strings together five minisongs into a single piece.

And while most of "American Idiot" flows seamlessly from one song to the next, unlike most rock operas, most of the songs can stand alone as singles and don’t suffer when removed from the context of the entire album.

The quality of "American Idiot" has translated into near-unanimous acclaim, a Grammy award for best rock album and album sales that have topped 4 million. The CD sits at No. 14 on the latest Billboard album chart — a year after its release.

Meanwhile, the latest single, "Wake Me Up When September Ends," recently peaked at No. 2 on Billboard’s modern rock chart and climbed to No. 7 on the Hot 100 single chart. Another single, "Boulevard of Broken Dreams," peaked at No. 2 on Billboard’s Hot 100 singles chart and won video of the year honors at the recent MTV Video Music Awards (one of seven VMAs for the song).

Green Day did not enter into the project expecting to create a punk opera, according to Cool. In fact, the band had recorded about 20 songs for a conventional CD and had started mixing the tracks. But then the master tapes were stolen.

Angered by the theft, the band decided, rather than rerecord those songs, to start from scratch and forget any rules they had made for themselves about songwriting.

One day, this approach prompted the three band members — singer/guitarist Billie Joe Armstrong, Cool and bassist Mike Dirnt — to playfully challenge one another.

‘‘After we were done, we had like a 10-minute piece that was like hilarious and funny and then thoughtful and provoking and provocative."

The structure of that piece triggered the idea of writing an entire rock opera, Cool says, and before long Armstrong had developed an outline for the entire CD.

"American Idiot," though, is anything but a simple work. On a lyrical level, it’s multifaceted, with songs that are by turns sharply political (as on the title song, which has become a No. 1 modern rock hit) and strikingly personal (as on "Extraordinary Girl" and "Wake Me Up When September Ends").

The CD doesn’t tell a story so much as present a series of snapshots involving several key characters, with Jesus of Suburbia being the main protagonist.

"Definitely this album has a lot of meanings for different people," Cool says.

Because "American Idiot" is clearly the most ambitious Green Day CD — and arguably the most ambitious punk-rock album ever — it’s tempting to consider it the band’s attempt to stay one step ahead of the many pop-punk bands that also enjoy considerable commercial success.

Cool, while acknowledging that he’s proud of the influence Green Day has had over the past decade, says competition is not what fuels the band.

"I don’t know about staying ahead or whatever. It’s just we don’t want to do the same things over and over," he says.