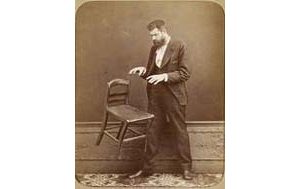 This 1875 photograph released by the Metropolitan Museum of Art of a levitating chair is titled \"Fluidic Effect.\" It is part of the Metropolitan\'s show in New York \"The Perfect Medium: Photography and the Occult,\" which runs u

This 1875 photograph released by the Metropolitan Museum of Art of a levitating chair is titled \"Fluidic Effect.\" It is part of the Metropolitan\'s show in New York \"The Perfect Medium: Photography and the Occult,\" which runs u

NEW YORK - Ghostly, pale images of the dead hovering near those still living. Self-proclaimed mediums with streams of "ectoplasm" from the spirit world spewing from their mouths. Levitating tables.

Just in time for the spookiest part of the year, a new exhibition looks at how photography was used by those attempting to capture evidence of the paranormal. "The Perfect Medium: Photography and the Occult" opened Tuesday at the Metropolitan Museum of Art and runs through Dec. 31.

The exhibition features about 120 photographs from collections all over the world, and arrives in New York after a showing in Paris. Most of the images date from about the 1860s until World War II, a period when people were greatly interested in spiritualism and the paranormal. Using photography to document any images or incidents became a popular way of trying to get proof.

"When scientists started getting interested in this, they used photography as an investigative tool," said Mia Fineman, who coordinated the show for the Met. "Scientists would organize seances specifically for the purpose of being photographed. They really were going at this from a scientific perspective."

The show is divided into three sections. The first features images of "ghosts" or "spirits," while the second section has photographs about mediums and their seances. The third sections looks at pictures of what people thought were the vital life forces emanating from human beings.

There's the photo from William H. Mumler, of Fanny Conant with the pale outline of a little Native American girl by her side, taken toward the end of the 19th century. In the section on mediums, Germany photographer Albert Von Schrenck-Notzing took an image in 1912 of Eva C., when a strange object shaped like a slipper appeared on top of her head. And from March 1896, there are images taken when a hand was placed on a photographic plate, by Russian photographer Jacob Von Narkiewicz-Jodko.

The museum doesn't offer any opinions on whether the images in the photographs are real, but does provide historical information about some of the controversies, including how Mumler was acquitted of fraud charges in 1869. French spirit photographer Edouard Isidore Buguet wasn't so lucky. He was arrested for fraud in 1875 and during his trial, acknowledged faking his images using double exposures. He was convicted and sentenced to a year in prison.

The show also contains images from critics of spiritualists, such as illusionist Henri Robin. One photograph shows him in the grasp of a ghostly skeleton, an image he openly admitted creating through a double exposure of the film plate.

There are also images of the Cottingly Fairies, pictures taken in 1917 by young English girls of what they said were fairies. Sherlock Holmes creator Arthur Conan Doyle was taken in by the hoax, which wasn't revealed until about 60 years later when one of the photographers admitted that the images were just cardboard cutouts, propped up with hat pins and shot in ways that made them look like the girls were interacting with them.

The museum has scheduled a series of lectures, films and gallery talks to coincide with the exhibit. The show will not travel.