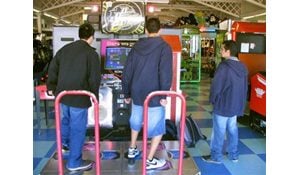 High-energy Dance Dance Revolution games have proven a bright spot for the arcade industry, though they were initially a tough sell.

High-energy Dance Dance Revolution games have proven a bright spot for the arcade industry, though they were initially a tough sell.

Free from school on a field trip, Omar Espinoza plunked several quarters into Mario Kart at Playland Arcade on this city's famous pier.

It was fun enough, the 18-year-old Espinoza said Tuesday, though he rarely visits such places. Pausing while friends leapt about on a Dance Dance Revolution game, he decided "it's good practice for playing at home" where he has a PlayStation 2 and GameCube.

It's a sign of the times for the reeling video arcade industry.

While they remain popular in Japan, the number of traditional arcades in the U.S. has plummeted over the past decade from 10,000 to around 3,000, according to Michael Rudowicz, president of the industry group American Amusement Machine Association.

Most companies making money off video games are doing so as part of a larger business involving food, drinks and parties. "Just an arcade by itself doesn't really cut it today," said Rudowicz, a former president of Konami.

According to Vending Times' latest Census of the Industry, the number of arcade game units nationwide -- at locations ranging from mini golf spots to movie theaters -- sank from 860,000 in 1994 to 333,000 in 2004. Revenue from the games dropped from $2.3 billion to $866 million in that period.

Profits remain so high only because the price of play has increased dramatically, Rudowicz says. The days of a quarter a credit are gone. At the Playland Arcade, it's tough to find a new game that costs less than $1 per play.

Even the pinball machines, tucked in a corner with themes referencing Elvis Presley and Harley Davidson, cost 75 cents each. It almost seems like they're trying to turn teenagers away.

"The business is made up of people who have been in the industry for a long time," said Steve White, editor at RePlay Magazine, an industry trade publication. "A lot of them are still in shock to some degree."

So are arcades in a death spiral? Let us count the blows.

GRAPHICS -- Home consoles have more advanced graphics than much of what's in most arcades, and TVs are increasingly as gargantuan as arcade game screens.

SOCIAL GAMING -- As a venue for socializing, arcades are increasingly eclipsed by online gaming communities like World of Warcraft. While virtual, they allow players to talk to each other in real time.

IMPULSE GAMING -- Out on the town and suddenly feel the urge to play a game? Nobody looks for an arcade any more. They just poke around in a purse or backpack for their PSP, Game Boy or even cell phone.

WINNING STUFF -- The urge to win stuff with the Claw and such has been replaced by the urge to win money. Every state but Hawaii and Utah has some form of legalized gambling. Compare dropping $1 to try for a CD or stuffed animal to trying for $100 or more at slots.

There are, however, some bright spots. Businesses like Chuck E. Cheese's and Dave & Buster's remain profitable by targeting distinct ends of the market and picking high-traffic locations.

Chuck E. Cheese's is the largest family entertainment center chain, targeting children under 12 primarily with ticket redemption games. It's expanded from 418 locations in 2003 to 475 last year, partly by buying back franchised restaurants. Annual revenue per restaurant remains steady at around $1.6 million.

Smaller traditional arcades can still thrive if they're in the right place, White said. Across the street from a high school, say, or in an amusement area.

Japan's arcades remain relevant for several reasons. Large Japan-based game manufacturers own and operate many of them, making it easier and less expensive to swap out aging games for new ones. It's also simply part of Japanese culture that men especially stay away from their small apartments or homes for much of the day.

Sega-Sammy developed ALL.NET, the Amusement Linkage Live Network, and launched Extreme Hunting Tournament Edition on the network in February. And U.S. company Incredible Technologies has made its Golden Tee golf game a networked hit, particularly in bars and truck stops.

There are more than 60,000 Golden Tee games nationwide, with half linked to networks allowing tournaments with real cash prizes in the thousands of dollars. At least $3 million was awarded in 2004, according to Vending Times.

Beyond online play, the future of arcades lies in redemption and prize-awarding games, White said. From 1994 to 2004, prize-dispensing game revenue increased from $281 million to nearly $1 billion, while ticket redemption games and pool tables saw similar increases.

And if you couldn't tell from watching "My Super Sweet 16" on MTV, birthday parties have gotten bigger than ever. Arcades and family entertainment centers are hiring event planners to learn how to maximize profits at parties.

"Sure, birthdays have been around forever. But birthday parties are a growth business," White said.

Maybe arcades won't die after all: There will always be birthdays.