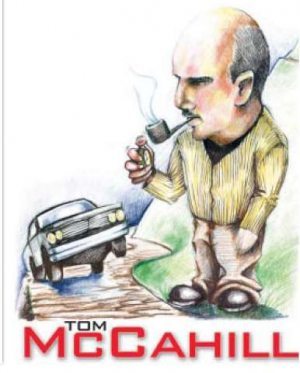 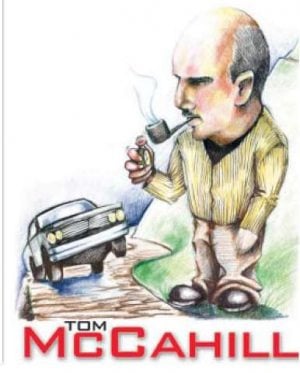 Maybe it was the direct blood connection with Scottish highwayman Rob Roy MacGregor that once turned an aspiring painter into a man of the road.

It could have been the Yale education in fine arts, the failed auto repair business during the Depression or just a want for things more poetic than pedantic.

But Thomas Jay McCahill III never planned on being the first and foremost authority on moving steel and glass.

His interests were simpler: An evening sail, an afternoon scotch or the morning snore of an idling V8 on the winding driveway of his 80-acre ranch off State Road 628 just outside little 1,600-person Glen Gardner, N.J., in the shadow of Pohatcong Mountain.

“A good sports car,” said McCahill before his death in May of 1975, “(is) like any other piece of good sporting equipment. It should be something you can work up a real affection for. You may even have a pet name for it, and you may even talk to it when you’re alone. Because you and the sports car, out on the road, are a couple of pals together.

“And if you’re incapable of working up such affection over a jewel-like piece of machinery, you’d be far better off with a Buick.”

The automotive world was far more entertaining with McCahill at the wheel.

From 1946 to the mid-1970s, McCahill’s test drives in the pages of Mechanix Illustrated inspired a nation of car enthusiasts, while changing the way average consumers viewed four tires and an engine. Long before Car & Driver added fifth wheels and electronic timing, there was McCahill, clocking his test cars with a stopwatch.

With his signature cob pipe and a balding head (“Old Chrome Dome,” he called himself), McCahill was an artist of hyperbole while being hard on the pedal, wrapping his prose in a humorous concoction of similes, metaphors and unique analogies, as his test cars rolled on from the Florida Keys to Fairbanks.

He was the first of his kind; he was one of a kind.

On a long-range test of the 1956 Imperial: “I left Florida one night on my northern test leg with the car loaded like a paddy wagon after an Irish wedding.”

And on American Motors’ decision to insist on conservatism in auto design shortly after Ford unveiled the first Mustang: “(That) pitch went over with the new breed of sporty-minded buyers like poison ivy at a nudist convention.”

In every way McCahill was the real McCoy, but he almost wasn’t.

Bornin1907intoafamilyofwealth and a long history of hard-working New York attorneys, McCahill first considered painting as a career and attended the Art Students’ League in Manhattan until the Depression blew away most of his inheritance and forced him into the real world.

His father had been a New York brand manager for Mercedes, which led to McCahill's interest in cars and his first garage business by age 25, fixing Rolls-Royces in Manhattan. The Depression sunk that, too.

Ten years later, after odd jobs and no jobs, McCahill, the wanderer, was McCahill the writer, convincing the editor of a do-it-yourself, home handyman magazine — that covered every piece of machinery from nuclear submarines to washing machines — it was time to cover cars. McCahill would do his own testing. He even used his own car.

That February in 1946, McCahill and his Ford were rolling for Mechanix Illustrated (later known as Home Mechanix), followed by road tests with friends’ cars or vehicles manufacturers would agree to loan out only because McCahill sold himself as a photographer, arriving with suitcases full of camera equipment.

Eventually, the car companies would give in and McCahill would never let up. Through the 1940s and ’50s — post-wartime in North America — he filled a void in automotive writing, allowing consumers to dream as he wove practicality with prose.

He was not an engineer or an expert. He was a fan of fast machines, and his reviews had an authoritative ring. Mostly, consumers could relate. Suddenly, a magazine once better known for helping people assemble foot stools was a must-read for car buffs. McCahill’s wit said it all.

He praised the Mark 2 MG roadster for its “swell” leg room but shattered it for its “lousy” foot room, admitting “I wear a (size 9) shoe, which is not exactly of Standard Oil tanker proportions, and it defeats me how those big-footed Englishmen manage.”

The Lincoln Mark VII was “as smooth as a vanilla ice cream soda that’s been standing in the sun.” The 1952 DeSoto was “rugged, tough (and) reliable as the Rock of Gibraltar — and just about as fast.” And the 1956 Buick was “as hot as the mustache of a cross-eyed flame eater.”

McCahill spoke bluntly, wore firm opinions on his sleeve and, if you didn’t agree, too bad.

And McCahill’s words were the dessert, even if his tests were rudimentary by today’s standards: a hand-held stopwatch, miles marked off in paint splotches, a heavy foot and Sunday drives by the seat of his pants.

But by the 1960s, major car magazines had begun to take shape, pushing McCahill and Mechanix to the background with scientific road testing and writing that was less hyperbole, more hi-tech.

Of his own accomplishments, Mc-Cahill was underwhelmed.

“I just like cars,” he said once. “That doesn’t require anyone special.”

But the essence of what made his work special was in his approach. Years later, the Internet is filled with Web pages devoted to McCahill’s writing and classic car owners who rave about ravings.

The ’59 Dodge with a “front-end as new as next February’s cold.”

The ’59 Thunderbird that “went over like a keg of brandy in a prison camp.”

And the early ’30s Classic Imperial with its “long-hooded brutes (that) had more sex appeal than a boatload of starlets anchored off Alcatraz.”

The highwayman lives on.

How Desert Ridge volleyball is dealing with the pandemic

Desert Ridge football shut down due to COVID-19