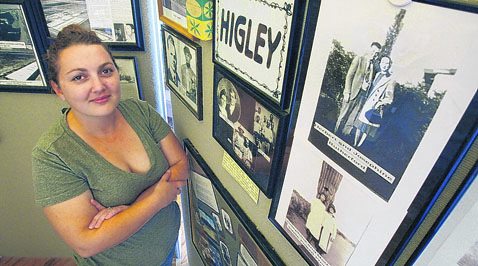 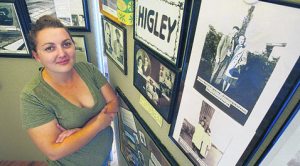 Leslie LeRoux stands with a small Higley display at the San Tan Historical Society in Queen Creek. LeRoux is trying to preserve the history of the Higley area through personal stories, photos and recollections. Oct. 15, 2009.

Leslie LeRoux stands with a small Higley display at the San Tan Historical Society in Queen Creek. LeRoux is trying to preserve the history of the Higley area through personal stories, photos and recollections. Oct. 15, 2009.

Higley started as a train stop in 1904. It eventually grew to encompass the desert farming community that, according to some maps, stretched from southern Mesa over Gilbert and Queen Creek to the Hunt Highway.

And now, save for a post office, the unincorporated town of Higley no longer exists on a map.

But Higley-area native Leslie LeRoux wants to make sure that history is captured before it also leaves residents’ memories.

“As with all history, you can’t know where you’re going if you don’t know where you’ve been,” said LeRoux, one of the curators of the Web site “Make Higley Historic!” “I really just want to honor those early settlers.”

LeRoux and the San Tan Historical Society are kicking off a project to do just that this weekend: They want to collect audio and written histories from area residents.

Residents are encouraged to bring in any Higley tidbits they have to the San Tan Historical Society, from photos and written stories to a willingness to sit down and record an audio history.

Some of the recordings LeRoux and her colleagues plan to collect over the next year will be turned into a driving tour of historic Higley. Drivers will be able to listen to residents tell the stories of sites like the Mansel Carter and Marion Kennedy grave sites at San Tan Mountain Regional Park, the Chandler Heights Trading Post and the former sites of several family farms as they stop at each location.

Dan Shilling, author of the book “Civic Tourism: The Poetry and Politics of Place,” will also be on hand Saturday to discuss the importance of preserving an area’s history and how it relates to Higley.

Shilling’s book encourages communities and the tourism industry to work together, using unique histories to entice people to visit.

“If you ask folks around the country why they come to Arizona, they don’t mention our housing and sprawl,” Shilling said. “They come because we have a different and unique environment and history.”

There are all kinds of ways a place such as Higley could preserve its history, from including exhibits in local hotels and businesses to partnering with other communities with farming histories to create a tour itinerary, Shilling said.

“How do we tell Higley’s story?” he said. “It’s not easy work. What we know is it’s easy to destroy a place. It’s really hard to save a place, and it’s hard to tell the story right.”

There may not have been any great battles fought in the area or famous people who called Higley home, LeRoux said. But it’s still important to capture stories from families who lived there.

“Higley is famed because the group of people who settled the area can be credited with putting in place the infrastructure which we all use now,” LeRoux said. “The most curious thing is that its history is on the verge of being lost since its existence is the only township (in the East Valley) that has been removed from the map.”

LeRoux’s Web site has already done this to a certain extent. A team of “Friendly Higley Historians” has spent the past year collecting stories and pictures from historic sources and longtime residents. The Web site already has several tidbits of Higley history, from items put in the cornerstone of Higley Elementary School in 1954 to the story of a zeppelin, a sort of blimp with a rigid frame that a local resident built off Williams Field Road in the mid 1970s.

But LeRoux is confident there are more stories out there, and she wants to be sure they’re shared before it’s forgotten that anyone used to have Higley addresses.

“You have to account for something with people’s heritage,” LeRoux said, “especially when their home is gone.”