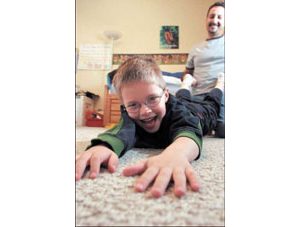 Michael Anderson, 5, plays with therapist Michael Petkovic during a session at the boy’s Tempe home.

Michael Anderson, 5, plays with therapist Michael Petkovic during a session at the boy’s Tempe home.

When Michael Anderson was a baby, he would often lie quietly for hours in his crib, sucking his thumb and staring into space.

"Most kids, after a while, they start crying and want out and want you to pick them up, and he’d keep lying up there and lying up there," says his mom, Sabrina Anderson of Tempe. "In the back of my mind there was this nagging (feeling) that this wasn’t quite right."

Michael didn’t play with toys and was aloof and passive at home but threw tantrums in public — tantrums so intense Anderson always had to leave.

"When they said ‘autisticlike features,’ it was numbing," says Anderson. "I never knew it was something like a silent cancer that creeps into your life."

Autism is difficult to define because each case is different. It’s a developmental disorder characterized by delayed or nonexistent communication skills and impaired social interaction. Autism falls along a diagnostic spectrum depending on the severity of the disorder.

Today, one in 166 children is diagnosed with autism in the United States, a number that is reaching epidemic proportions, says Jessica Irwin, director at S.E.E.K. Arizona, an autism resource center in Mesa. A decade ago, 1 in 1,000 people were diagnosed with the disorder, which is now more prevalent than mental retardation.

While the causes vary and are debated, there is no cure.

"There’s a lot of unknowns," Irwin says. "At some point, there probably will be a way to protect children from going in that direction."

In the meantime, the best course of action is early intervention, with a goal of facilitating a child’s communication skills.

"They’ve got the world going on upstairs but can’t get it out verbally," Irwin says. "If you’ve got a child who’s absolutely frustrated, locked inside his own head and can’t communicate, behaviors begin to spiral out of control."

Early intervention addresses the behaviors before they get out of control, introducing autistic children to the world in a way they understand. Social impairments are also linked to a lack of communication, Irwin says, because autistic children have no way to relate to others.

"Some kids are aging out of the disorder, so to speak," she says. "They get to the point where they are in a mainstream school and no one knows they are autistic. They’ll always have autism in their lives, but they will learn to deal with it."

Michael is now 5 1 /2, and has learned to communicate and interact with kids his age — he’s even enrolled in a mainstream kindergarten program in Tempe.

He’s been involved in about 30 hours of intensive intervention with counselors since his diagnosis, a regimen Anderson says she will continue as long as her son needs it.

"Within the first couple of weeks the therapist was getting him to engage and look at her. In a pretty short period of time the gains were just phenomenal," Anderson says. "I think luck played a part of it but I also think early intervention had a huge part in it."