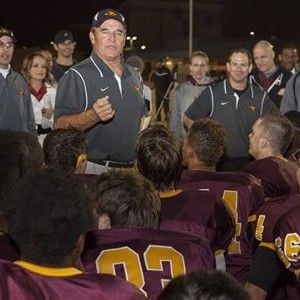 Head Coach Norris Vaughan speaks to the team after their win during the state semifinals between Mountain Pointe and Brophy at McClintock High School on Friday, Nov. 16, 2012. 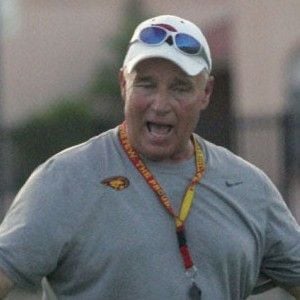 Mountain Pointe coach Norris Vaughan has brought discipline and accountability to the program.

Head Coach Norris Vaughan speaks to the team after their win during the state semifinals between Mountain Pointe and Brophy at McClintock High School on Friday, Nov. 16, 2012.

Mountain Pointe coach Norris Vaughan has brought discipline and accountability to the program.

So when the candidate before him showed up late, forcing Vaughan to sit in a room waiting a little long before his opportunity to interview for the Mountain Pointe opening in December of 2008, predictably, Vaughan didn’t let the extra time go to waste.

And it was the first sign that the wily Georgian was the right fit for the Pride’s program.

“We go to get him, and he’s standing there with (defensive coordinator Jeff) Decker at the white board drawing up plays,” Mountain Pointe athletic director Ian Moses recalled. “The man thinks about football constantly. It is something we know very well now and that was the first sign of his passion.

“These guys knew each other all of 30 seconds and there they were sharing ideas.”

It wasn’t all that long before that impromptu coaching moment when Vaughan’s football days were supposed to be over.

Vaughan and his family moved to Arizona with the idea of Norris retiring and pursing a spot on the mini-golf tours while possibly doing some coaching part time as he did at Paradise Valley in 2004.

Vaughan rarely sits idly by, even if he has a putter in his hand.

“About six months into it I knew it wasn’t going to work,” Vaughan said. “My wife (Ellen of 35 years) talked me into it. She said I needed to go back to what makes me happy and we thought about going back to Georgia, but we liked it in Arizona and a opportunity presented itself.”

After his one year at Paradise Valley, Vaughan made his way over to Wickenburg, Ariz., and made it a 3A power (47-5) before showing up at Mountain Pointe (40-10) where he found tons of promise but almost as much negativity.

So changes were made.

Vaughan’s strong will, old-school ways, along with some odd Southern sayings, were in place by the end of spring ball in 2009. Discipline was word one and it was essentially his way or turn in the shoulder pads.

A couple of quality players were dismissed from the team because they were hanging on to the old ways where the easy route was taken too often.

It didn’t exactly fall in line with Vaughan’s vision so examples were made.

“It’s been a long and winding road to get to this point,” he said. “Culture was a big thing. We had to implement a stringent policy. You have to play with discipline and have discipline in the classroom or you are going to struggle when you are faced with adversity.”

It led to a philosophical change not only with the football program, but for Pride Nation as a whole.

“We needed someone with a strong personality who could impose himself on the football program, the athletic program and the school,” Moses said. “He has done exactly that. A number of coaches contacted us and the first one was Norris Vaughan. I remember people remarking what were we doing hiring a 2A (actually 3A) coach to run a program this big. Those people, obviously, didn’t know Norris because he commands respect and it was clear he could coach at any level.”

After a bit of a step back in 2011, the Pride still went 6-5 and made the playoffs (a far cry from the 23-28 mark in the five years before he was hired), Mountain Pointe has run through the state’s toughest schedule (eight playoff teams) to earn the chance to play for the Division I championship.

And he isn’t about to sit idly by now.

“Life has adversity and you have to deal with it,” Vaughan said. “There are always things you have to overcome and this team has as well. It brings you closer together and we are right where we want to be. That’s what this year has been about and these players have done everything they can to be champions.

“No matter what happens (in the game) this is a special group.”

Now the Pride, and their ring leader, are one game away from winning it all.

“His style is definitely different,” assistant coach and former head basketball coach Brian Fleming said. “It’s a different attitude and he came in spitting and ready to roll. It was clear that he believed this is the way it needs to be to get where we want to be.

“And it really has never wavered. He knows what he wants and how to get it. That’s his style and his way has definitely shown to work and now he is at the pinnacle.”

The ball will be in the air a lot.

Stumbling block or spring board: Pride can be first team to make it past semifinals

A semifinal appearance can be a difficult landing point.

Pride focused on making up for lone loss against Brophy

Two quarters of bad football, the equivalent of 24 minutes of game time out of a total of ab…

When Norris Vaughan is excited he can’t contain himself, words flow from his mouth that mayb…

Trevor Neider knew he was up against it.

MP has 2 signed letters of intent

Mountain Pointe continues to move student athletes on to the next level as two athletes signed or are expected to sign letters of intent.

For those who cannot make it to the Mountain Pointe-Hamilton state title game on Saturday at University of Phoenix Stadium, the game will be t…

By the time the student body reached the turf at Karl Kiefer Stadium on the third Friday of August, the Mountain Pointe football team, celebra…