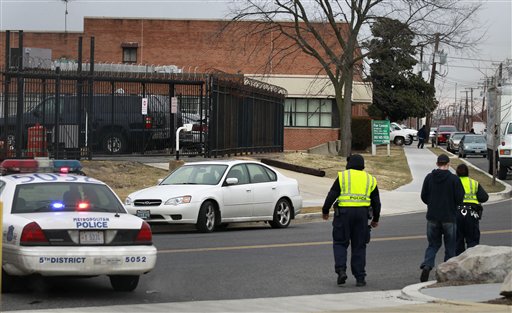 Law enforcement officials are seen near a postal sorting facility in Washington, Friday, Jan. 7, 2011, after a package ignited. The package ignited at the facility, a day after fiery packages sent to Maryland's governor and transportation secretary burned the fingers of workers who opened them. (AP Photo/Alex Brandon) 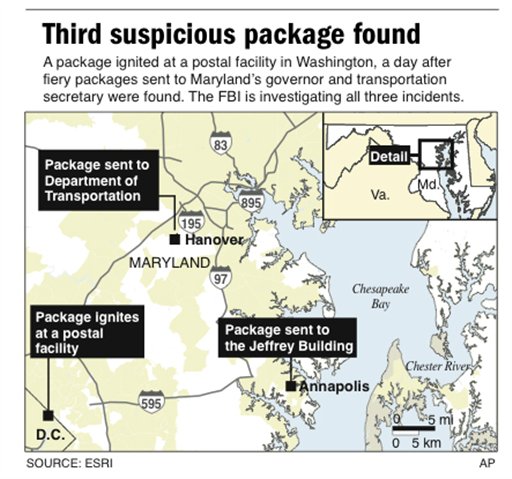 Map shows locations where suspicious packages were found in Washington and Maryland.
1 of 2

Law enforcement officials are seen near a postal sorting facility in Washington, Friday, Jan. 7, 2011, after a package ignited. The package ignited at the facility, a day after fiery packages sent to Maryland's governor and transportation secretary burned the fingers of workers who opened them. (AP Photo/Alex Brandon)

Map shows locations where suspicious packages were found in Washington and Maryland.

A package addressed to the U.S. Homeland Security secretary ignited Friday at a postal facility, and authorities said it was similar to fiery parcels sent to Maryland officials a day earlier by someone complaining about the state's terrorism tip line.

The suspicious package was discovered by an employee at the D.C. facility when it began popping and smoking and emitted "a brief flash of fire" before extinguishing itself, D.C. Police Chief Cathy Lanier said. The details were very much like what Maryland authorities described Thursday after workers at state government buildings opened the small packages about the size of a book. There, the workers' fingers were singed.

It's not clear what ignited the package at the D.C. facility because the worker didn't open the package, Lanier said. No one was injured.

Authorities were bracing for more packages to surface.

"Right now we don't have any other packages, but we're not taking anything for granted," Lanier said.

The D.C. package was addressed to Homeland Security Secretary Janet Napolitano, according to a department official who spoke on the condition of anonymity because of an ongoing investigation. The parcel ignited in northeast Washington about 2:45 p.m. Authorities wouldn't say whether it contained a note.

In July, Napolitano launched a nationwide "see something, say something" campaign. Her recorded voice can be heard in Washington-area Metro stations, reminding commuters to report suspicious behavior.

The state's terrorism tip line is widely shown on overhead highway signs along with information about missing children. To the ire of some drivers, the signs added real-time traffic estimates to major highways in March. Some commuters complained drivers slowed to read the signs and backed up traffic. At Gov. Martin O'Malley's request, the state studied the issue and removed the real-time postings from one congested area on the Capital Beltway. There are some 113 signs statewide.

The earlier packages, addressed to O'Malley and to Transportation Secretary Beverley Swaim-Staley, have been taken to the FBI lab in Quantico, Va., for forensic analysis. They did not contain explosive material.

They were opened within a 15-minute period Thursday at state government buildings 20 miles apart. Mailroom employees around the state were back at work Friday, and they had pictures of the packages and were advised to be vigilant about anything suspicious.

"An incident can take place at any facility," she said.

Investigators had no previous indication the packages would be sent anywhere other than Maryland government buildings, FBI spokesman Richard J. Wolf said. While Maryland State Police has been the lead investigative agency, the FBI might now be forced to take a more active role, he said.

Police have not yet identified any suspects and were searching for disgruntled people who've made threats against state government. Anyone arrested would be charged with possession and use of an incendiary device, which includes a maximum penalty of 20 years in prison, authorities said.

There are definitely some nut jobs on the loose. I wonder if this has anything to do with her refusal to acknowledge the problems and danger we face from the never ending stream of drug and human trafficking.

If this is the case, there are other ways to get the message out. Call her, send her e-mails and let her know that she is not representing the wishes of our citizens. At one point she should get the message. I am worried though that american citizens can only be pushed so far before they come out fighting for what is theirs. It 's a shame that our government is more concerned about the rights of illegals than the rights of our own citizens. It's a sad state of affairs.