You are the owner of this article.
Edit Article Add New Article
You have permission to edit this article.
Edit
Home
The Mesa Tribune
Scottsdale Progress
The Chandler Arizonan
Gilbert Sun News
Sports
Best of
Digital Edition
More
Classifieds
Contact Us
1 of 3 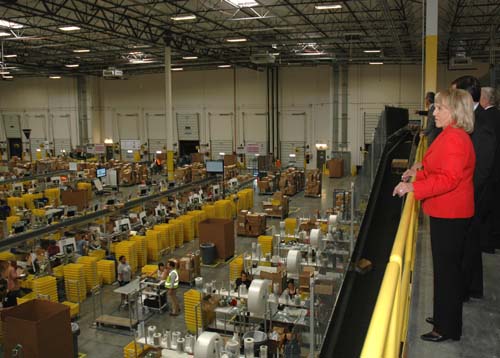 Gov. Jan Brewer tours one of the three Amazon distribution centers in the state on Thursday after the company announced it would build a fourth, in Phoenix. 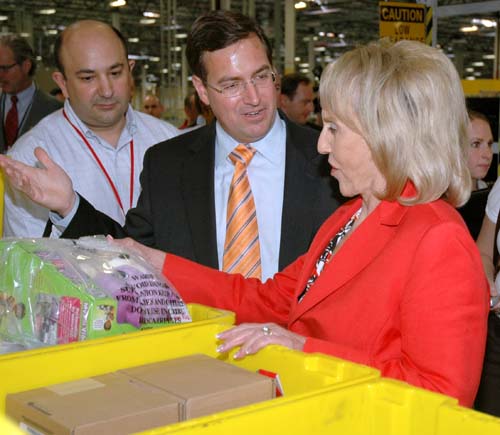 Dave Clark, an Amazon vice president, explains the operation of one of its Arizona distribution centers to Gov. Jan Brewer on Thursday after the company announced it would build a fourth, in Phoenix. 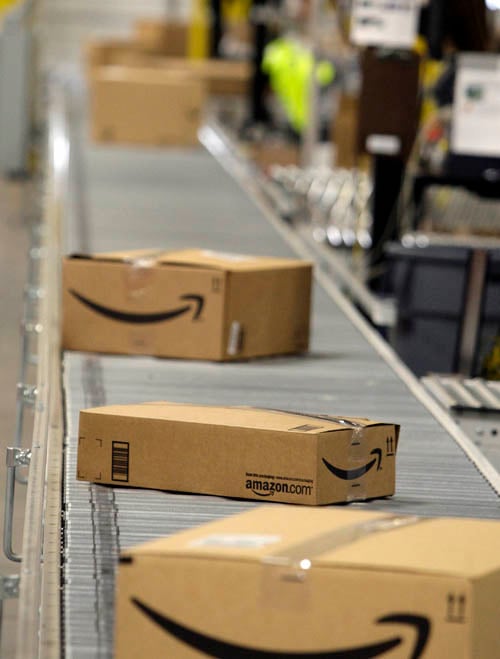 In this file photo made Monday, Nov. 16, 2009, packages move along a conveyor system to outgoing truck for final shipment inside the 800,000 sq. ft. Amazon.com warehouse, in Goodyear.

Gov. Jan Brewer tours one of the three Amazon distribution centers in the state on Thursday after the company announced it would build a fourth, in Phoenix.

Dave Clark, an Amazon vice president, explains the operation of one of its Arizona distribution centers to Gov. Jan Brewer on Thursday after the company announced it would build a fourth, in Phoenix.

In this file photo made Monday, Nov. 16, 2009, packages move along a conveyor system to outgoing truck for final shipment inside the 800,000 sq. ft. Amazon.com warehouse, in Goodyear.

Someone is going to have to address the issue of whether Arizonans -- and others -- should be charged sales taxes on purchases they make online, Gov. Jan Brewer said Thursday.

But she's not sure that someone should be the state.

The governor's comments came after she toured one of three distribution centers that Amazon.com already operates in Arizona and as the company said it plans to open a fourth, in Phoenix.

But the issues are related. Even Don Cardon, director of the Arizona Commerce Authority, said the fact Arizona does not tax Internet sales, unlike some other states, probably gives it a competitive advantage in attracting firms like Amazon.com.

The company itself has taken a hard-line position on the issue. It announced at the end of June it was cancelling its contracts with about 10,000 California business partners just hours after Jerry Brown, that state's governor, signed legislation requiring out-of-state retailers who use affiliates within the state to collect sales taxes on purchases made by Californians.

Rep. Jim Weiers, R-Phoenix, pushed a similar measure this session, only to have it blocked.

Brewer, asked about whether Arizona should have retailers from elsewhere collecting Arizona sales taxes, sidestepped the question.

"I think that probably might, at some point in time, be resolved,'' she said. "I'm not in a position today to really discuss that.''

Pressed for how she would want it "resolved,'' the governor said that the subject has been around as long as she has been an elected official. That goes back to 1982 when she was first elected to the Legislature, though the sales being discussed for taxation at that pre-Internet time were by phone and catalog.

"The discussion has been long and lengthy,'' Brewer continued, with no solution. "But we know as we are moving into this new century of doing business that, I'm sure, that the federal government will continue trying to address that issue.''

The U.S. Supreme Court ruled nearly two decades ago that a company must have a physical presence in a state to be required to collect sales taxes.

Instead, most states, including Arizona, require those who buy items from out-of-state merchants to voluntarily report the purchases and pay the state sales tax. That system, though, has proven largely unenforceable, with collections far less than what they would be if the retailer, whose books can be audited, collected the tax and remitted the proceeds to the state.

What has happened, though, is several states have discovered what they believe is a loophole to allow them to put the burden on retailers, one that appears aimed largely at companies like Amazon.com and the way they operate.

It all has to do with the fact that Amazon has business relationships with companies in Arizona -- what it calls "affiliates'' -- who have their own web sites but get a commission when a customer clicks on a link and makes a purchase. What the Arizona law sought to do, and what other states have done, is redefine what it means to be conducting business in the state and therefore, required to collect taxes.

By dropping its California affiliates, Amazon.com hopes to escape the requirement to collect sales taxes made to Californians.

At Thursday's announcement, Paul Misener, the company's vice president of global public policy, made no secret of the fact that his company's decision of where to locate future facilities has a link to its policies on sales taxes.

He said the U.S. Constitution established a "federation of states'' which retained many powers and a federal government which took over some, "including the responsibility of regulating interstate commerce.''

And Misener said that role "must be respected.''

"Citizens of this country, individuals or companies, are free to choose where to live, and the state and local governments may adopt policies that attract and retain these citizens,'' he said. "We deeply appreciate leaders who respect and appreciate that balance.''

Amazon.com and Overstock.com filed separate lawsuits against the state of New York in 2008 when it adopted a law requiring them to start collecting sales taxes on purchases made by New York residents. That case remains open, with the companies collecting the taxes in the interim.

In an interview earlier this year with Reuters, Amazon.com CEP Jeff Bezos said it would cut its partnerships with affiliates in any state that requires it to collect sales taxes.

"In the U.S., the Constitution prohibits states from interfering in interstate commerce,'' Bezos told Reuters, citing that 1992 Supreme Court decision. He said the "right place'' to fix the issue is with federal legislation.

Amazon.com Inc. says it will open its fourth distribution center in Arizona.

Letters: Internet sales are taxed in Arizona, but not everyone follows the rules

Arizona Commerce Authority Director Don Cardon is incorrect in stating that Arizona does not tax Internet sales. The fact is that Internet sal…

The explosion of Internet sales is fueling a new debate over whether Arizona should try to force out-of-state firms to collect the state sales tax.

Our View: There needs to be a fair, easy way to tax online sales

When it comes to online businesses, big and small, Arizona is a haven.

Having the buyers self-report and pay the sales tax is absurd. And how many internet police might that require?
The sellers are in business, they do the tax collection and remittance. But in fact, requiring them to do on internet sales just screws up an otherwise great venue for growth.
I know the state is hurting. Welcome to the club. Maybe the state needs to reduce their bureaucracy even more. Carrying around this much government, taxation, regulation, and reporting is one of the big reasons corporations want to get out of the U.S. to begin with. Don't make it worse.

Will you need to report what you spent downloading music or apps from the Internet to your cell phone? Are magazine or newspaper subscriptions subject to this sales tax reporting? How about phone cards and gift cards? We have about a thousand more questions about this reporting requirement. I went the the AZ IRS web site and they do not have any information on this issue and they have no way to email questions to them. It seems that the ultimate goal is to make all AZ taxpayers insecure that they are correctly reporting any tax due. Sales tax collection and reporting should be a retailer's responsibility, not a consumers. Maybe we should just all stop spending money anywhere (that should help the economy a lot!)!!!

Amazon could move to another country. Taxing them would not be smart. It would just kill jobs.

jim weiers, like most politicians, will be in a position to answer that once the lobbyists let him know the answer.

Someone has to pay for the illegal aliens sapping our stat's resources dry.

Our government is like a drug addict; giving it more drugs isn't going to make the problem any better. Our government needs rehab; it's addicted to stealing other people money. Addicted to spending more than it steals. Addicted to lying to voters on what their spending their money on. Addicted to being deceitful and malicious resorting to even violence if they don't get what they want... Our government, it's officials and high-ranking employees are addicts. They need help before they bleed us to death.

Section 7 basketball tournament returns after year away due to pandemic

Highland football enters summer with redemption on the mind